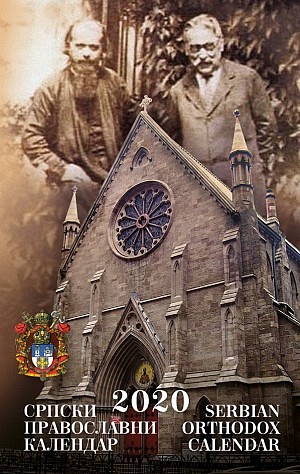 The Serbian Orthodox Diocese of Eastern America has dedicated the year 2020 to the great Serbian scientist, inventor and philanthropist by honoring the 85th Anniversary Year of the repose Mihajlo Idvorski Pupin.

His Grace Bishop Irinej of Eastern America has provided the impetus for this special Commemorative Year. In the Resolutions of the 2020 Eastern American Diocesan Assembly, held in St. Petersburg, Florida from February 27-28, the following citation noted the said dedication:

“WHEREAS the year 2020 marks the 85th Anniversary of the Repose of Mihajlo Idvorski Pupin (March 12, 1935-2020), Educator, Inventor, Scientist, Svetosavac (Follower of the Way of St. Sava), and Great Benefactor of the Serbian Orthodox Church and People in general, and of St. Sava Monastery in particular, and WHEREAS as honorary Serbian Consul General to the United States, President of the Central Committee of the Serbian National Defense, Professor Dr. Mihajlo Idvorski Pupin of Columbia University was the founder of the “Serbian Relief Committee,” headquartered at 70 Fifth Avenue in New York and WHEREAS he was greatly assisted in his work by the then Archimandrite Nicholai (Velimirovich) and Helen Losanitch-Frothingham, the appointed Serbian Red Cross delegate to America.

THEREFORE, LET IT BE RESOLVED that, with our brethren who have reaped the benefits and learned from the witness of Mihajlo Pupin, we mark this 85th Anniversary of his repose, acknowledging that all glory is due God, with thanksgiving for his God-pleasing work, and with our humble prayers to God for his salvation and eternal memory.”

His Grace Bishop Irinej has established a Memorial Wall in the Episcopal Residence and Diocesan Center of Eastern America, featuring four prominent Serbs, who referred to themselves as “New Yorkers” - Mihajlo Idvorski Pupin, Bishop Nicholai Velimirovich, Helen Losanitch-Frothingham and Nikola Tesla. The Honorable Dr. Branko Terzic is the donor of the portrait of Pupin and sponsored the framing of the other portraits. Formerly a Commissioner on the State of Wisconsin Public Service Commission, and Commissioner for the Federal Energy Regulatory Commission, Terzic is honored as the only other Serb, in addition to Pupin, to have been received into the prestigious Cosmos Club of Washington, DC. This eminent institution is reserved for select persons who have distinguished themselves in science, literature, the arts, a learned profession, or public service.

Marking this special memorial, the 2020 Calendar of the Diocese of Eastern America is dedicated to this Anniversary Year. The front cover features the impressive St. Sava Cathedral in New York City, which is home to a bronze bust of Pupin, which will again be installed in a Memorial Garden that is planned for its proposed courtyard. Also, at one time in its history, a Memorial Chapel was dedicated at the hands of the Holy Bishop Nicholai (Velimirovich) in the Cathedral to its faithful son, Mihajlo Pupin. His Grace Bishop Irinej has included plans for the reestablishing of the Memorial Chapel.

The Serbian Cultural Garden in Rockefeller Park, a prominent garden of Cleveland Cultural Gardens in Ohio, prominently features an impressive bronze bust of Mihajlo Pupin. From the original 1932 Yugoslav Garden, the Serbian Cultural Garden was independently established and expanded largely with numerous busts of distinguished Serbs, through the efforts of Alex Machaskee, retired Publisher, President and Chief Executive Officer of The Plain Dealer, Ohio's largest newspaper.

On Sunday, March 15, 2020, Protopresbyter Djokan Majstorovic, parish priest at the St. John the Baptist Serbian Orthodox Church in Paterson, New Jersey, and long-time parish priest at the St. Sava Cathedral in New York City, faithfully, as every year in the past, with the blessings of Bishop Irinej, served a Memorial Service at the grave of Mihajlo Pupin at Woodlawn Cemetery in the Bronx. Acting Consul General of Serbia in New York Olgica Vlacic, together with the Consulate staff, laid flowers on the graves of Michael Pupin and his wife Sarah on the occasion of the Memorial Service. Distinguished visitors, both Serbian and others, local and international, regularly pay their respects at the grave of this great son of Serbia.

Woodlawn Cemetery, one of the largest cemeteries in New York City, is a designated National Historic Landmark in 2011, joining a rarified roster of 2,500 sites nationwide. Located in Woodlawn, Bronx, New York City, Woodlawn Cemetery opened during the Civil War in 1863. Today it is an oasis in an urban setting, more than 310,000 individuals are interred on its grounds and it attracts over 100,000 visitors from around the world each year. Described by the National Park Service as “a popular final resting place for the famous and powerful,” such as Princess Anastasia of Greece and Denmark; authors Countee Cullen, Nellie Bly, and Herman Melville; musicians Irving Berlin, Miles Davis, Duke Ellington, W. C. Handy, and Max Roach; along with businessmen, such as shipping magnate Archibald Gracie and department store founder, Rowland Hussey Macy.

A special Commemorative Academic Program on Pupin was planned by the Advisory Council of the Njegos Foundation for Serbian Studies at Columbia University, under the leadership of Professor Dr. Radmila J. Gorup. His Alma Mater features, among all else, the famed Pupin Physics Laboratories, also known as Columbia Hall, named after its renown alumnus and professor emeritus Mihajlo Pupin. However, in light of current circumstances, this anticipated commemorative presentation has been postponed for a later date.

Gratefully, the memory of Mihajlo Idvorski Pupin lives on in the hearts and minds of Serbian Americans, inspiring present and future generations to come.