Visit of His Beatitude, Patriarch Irinej of Serbia at the Archdiocese Headquarters 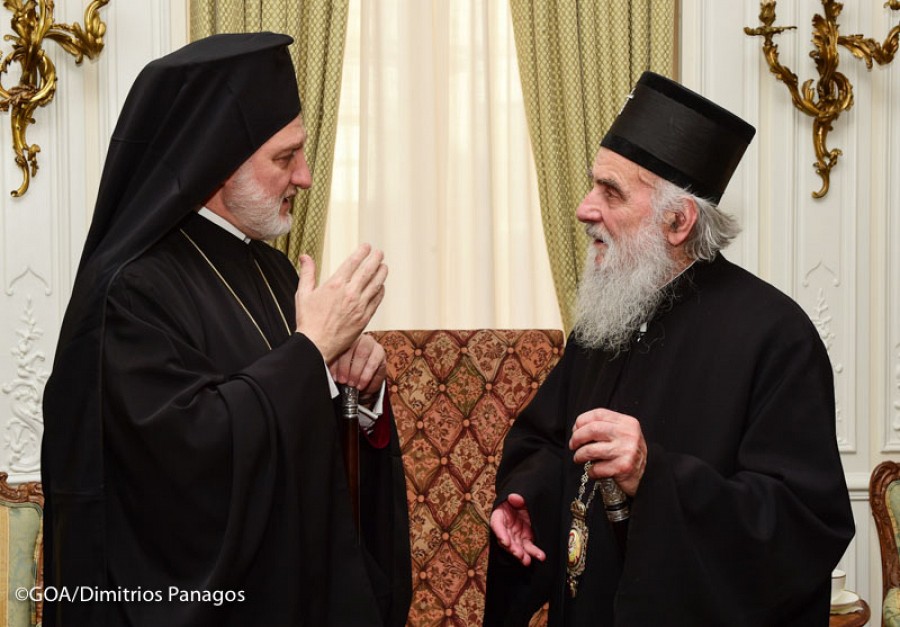 NEW YORK – On Wednesday, March 4, 2020, His Beatitude, Patriarch Irinej of Serbia visited the Archdiocese Headquarters. In his welcoming remarks, His Eminence Archbishop Elpidophoros of America expressed his joy in welcoming the Primate of the Orthodox Church of Serbia and highlighted the spirit of cooperation between the Churches, especially in the United States. He also emphasized the permanent support of the Ecumenical Patriarchate regarding the concerning situation in Montenegro. “Therefore,” the Archbishop said, “with fraternal love and the deepest respect, we embrace Your Beatitude in the bonds of fellowship, peace, and concord, always praying for Your Beatitude’s health and spiritual prosperity, as well as of that of the faithful and noble Serbian Orthodox Church.”

In his response, His Beatitude, Patriarch Irinej of Serbia thanked His Eminence for his warm words and for inviting him to meet at the beginning of Holy and Great Lent. He mentioned the historic ties the Serbian and Greek people share from the time of St. Sava in the 13th century. “We are the children of Byzantium. We have built our churches looking upon the example of Byzantium to which we have added our particular influence, like the monastery in Studenica.” His Beatitude not only insisted on their common roots, but also on the spirit of brotherly help and support, especially during the time of World War I, when the Serbian army found safety in Crete before they returned to liberate their lands, or more recently during the war in Kosovo, and today with the situation in Montenegro. “We remain,” the Patriarch said, “firmly and permanently bound with the Greek people.”

His Beatitude was accompanied by His Grace Bishop Jovan of Shumadia, His Grace, Bishop Irinej and Protodeacon Damjan Bozic.

A few days before, His Beatitude, Patriarch Irinej of Serbia attended the Extraordinary Sobor of the Serbian Orthodox Church in North, Central, and South America which took place in Clearwater, Florida on February 29, 2020.

Visit of HIs Beatitude, Patriarch of Serbia at the Archdiocese Headquarters - 03/04/20