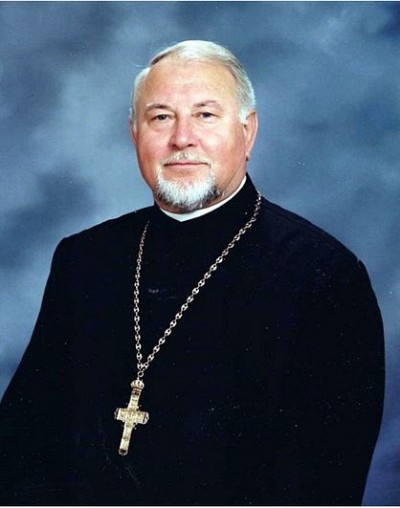 Father Velimir Petakovich was born in the Sumadija area of Serbia in 1933 to the family of Protopresbyter-stavrophor Radisav Petakovich, a Serbian Orthodox priest. Raised in and about the church, his religious education began early in his father’s home.

Father Petakovich’s childhood between the tender ages of 8 to 12 years, spanned the soul trying time of World War II when Yugoslavia was occupied by Nazi Germany and ravaged by civil war and revolution. During those difficult times every sort of misfortune, human failing, and blindness confronted his father. The suffering, hunger, bombardment, and death all around that Father Petakovich experienced as young boy never left him.

Suffering continued after the war, too, when the Bolsheviks took over the government and instigated more killing and looting and forcibly imposed Marxist and Atheist ideology upon the country. Nevertheless, the Serbian Orthodox Church found strength enough to re-establish the seminary in Prizren, Kosovo, in 1947, and Father Petakovich became a student in the first generation of seminarians after the war. He graduated in 1951 and continued his education at the University of Belgrade, School of Divinity, successfully obtaining his master’s degree in 1956.

In 1958 he left Yugoslavia and spent two years in West Germany where he worked for the British Army as an assistant to the Serbian Orthodox Chaplain and then in the Royal Air Force (RAF) hospital. While in West Germany, he married Ljubinka Vukovic, whom he had met in Belgrade at the University where she studied Philosophy and Foreign Languages. They immigrated to the United States in 1960.

Father Petakovich’s first church assignment in the United States was in Gary, Indiana, as a teacher at the St. Sava church school. He was ordained a priest the same year at the Serbian Orthodox monastery of Saint Sava in Libertyville, Illinois, and became the parish priest of St. Sava Church in Gary, where he faithfully served. In 1961 God blessed him and Protinica Ljubinka with their first-born son, Deyan. In 1964, the young family came to San Diego to serve at the St. George Church. God granted them two more children, Simona born in 1965 and Alexander born in 1969.

In 1966, with the pious, unselfish parishioners of St. George Church, Father Petakovich lead the congregation in acquiring the magnificent property overlooking Mission Bay and the ambitious building plan that included the completion of the church social hall and Sunday school classroom that served as the temporary sanctuary in 1967, followed by the parish house in 1968, and then the completion of the church in 1969.

With great concern that traditional frescos paintings would not endure the damaging affects of the sea salt air environment from nearby Mission Bay, it was Father Petakovich’s vision to adorn the interior of the church and exterior domes with permanent mosaic artwork in the Byzantine style of the old world churches and so he engaged Giovanni Nastrucci, a principal in the Mexico City firm of Mosaicos Italianos along with Publio Cavallini a talented artisan mosaic tile setter assisted by his son Amilcare from San Antonio Texas. All the frescos were initially created full scale on craft paper by academic painter, Stevan Cukic from Belgrade and San Diego artist, Mr. Donald Donnelly. With blessings of His Holiness Patriarch German, the official Patriarchate iconographer, Deacon Marko Ilich from Belgrade painted traditional smaller scale icons on wood. Father Petakovich ingenious idea of photographing the smaller scale icons and projecting photographic slides onto craft paper proved to be an incredible time and cost saving method.

Father Petakovich was the driving visionary force behind the enormous building project of the new St. George church. He also was instrumental in raising much of the money for the approximately $250.000 investment. Since the undertaking left the congregation nearly bankrupt at times and in order to alleviate the church of the financial burden to pay his salary, Father Petakovich volunteered to forgo his priest’s salary and worked for five years in the Administrative Services Department of First National Bank, while at the same time raising his family and carrying on his church duties, often putting in 18-hour days traveling to all 50 bank branches extending as far as 200 miles north to Ventura County. In recognition for all his dedicated works and sacrifice, His Grace Bishop Irinej awarded Father Petakovich with the Red Sash, elevation to the Protopresbyter-stavrophor (a pectoral cross) on June 1, 1986.

Father Petakovich participated in many religious, civic and social activities in San Diego. In honor of his years of dedicated service to both church and community at large, many honors were bestowed upon him including an award from the Freedom’s Foundation at Valley Forge for outstanding achievement in bringing about a better understanding of the American way of life and a medal for Americanism from the Daughters of the American Revolution, an award given only to naturalized citizens. He was also given honor certificates from the USA 1976 Bi-Centennial Committee, Ecumenical Council, National Council of Christians and Jews, and the US Navy and Marines for his five years’ of service as chaplain at Camp Pendleton’s Holy Trinity Orthodox Chapel. City of San Diego Mayor Pete Wilson (later Senator, Governor and US Presidential candidate) proclaimed Sunday, November 26, 1978, “Fr. Velimir R. Petakovich Day”, in recognition of his devoted and distinguished service to the community. Proclaiming, WHEREAS, Father Petakovich has made outstanding contributions to the cultural heritage of the Serbian community of San Diego and WHEREAS, Father Petakovich has given to the citizens of San Diego one of the few churches in the world that is fully completed in mosaic tile.

At the request of parishioners and blessing of His Grace Bishop Irinej, Father Petakovich also served as the first parish priest of St Petka Church in San Marcos from 1986-1987. With his experience, knowledge and God given talents, he shepherded the newly established parish in building the beautiful St. Petka Church. Father Petakovich also dutifully served the church as Bishop’s Deputy for the Serbian Orthodox Diocese of Western America. In that capacity, he was a tireless and active member of many church committees and organizations at the national level. Father Petakovich was also a benefactor for the Chapel at the Theological Seminary in Belgrade, Serbia as well as a steward and benefactor to St George Church and other Serbian Orthodox Churches and Serbian causes worldwide.

The parishioners of St. George Church and the Serbian Orthodox community as a whole will most remember Father Petakovich for the faith, God-given enthusiasm, artistic and historic sensibilities, and unparalleled ingenuity with which he led a small and humble congregation from its displacement in North Park to the magnificent present day’s commanding location above Mission Bay, and for the sacrifices of time and energy he and his family made to finish the task.