Memorable Encounters: The Famous, Fascinating, and Ordinary People of the Serbian Diaspora 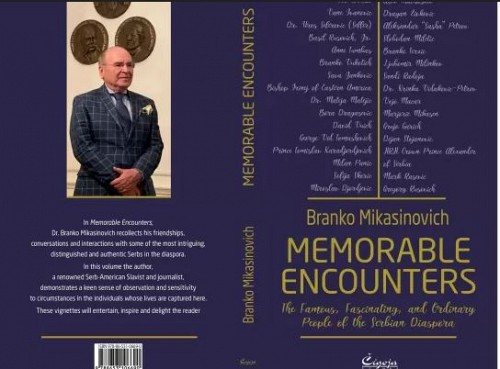 Memorable Encounters: The Famous, Fascinating, and Ordinary People of the Serbian Diaspora

It is with great pleasure that we inform you about the publication of a new book by Dr. Branko Mikasinovich of Washington, DC, titled Memorable Encounters: The Famous, Fascinating, and Ordinary People of the Serbian Diaspora.

Appropriately subtitled “The Famous, Fascinating and Ordinary People of the Serbian Diaspora” Mikasinovich’s latest book Memorable Encounters delights us with a compilation of vignettes, insights and views of some of the extraordinary characters, “movers and shakers” and just plain regular people he has met, interviewed or dined with the past five decades after his arrival as a student in America from his native Serbia.

Among the people interviewed are a Nobel Laureate, a Crown Prince, a billionaire, a singer popular on both sides of the Atlantic, a former spy and many others. Some of the names you will recognize and others you will not but each short encounter is a story to be remembered and shared.

What does one take away from a conversation? For Branko Mikasinovich in his Memorable Encounters it is more than an exchange of words. He describes the scene and the demeanor of his interlocutors and tries to capture their essential spirit. He has as his subject a collection of notable Serb exiles, who share with him their love of country and, in their own ways, their distance from it.

Although melancholy at times, gazing into the face of missed opportunity or wistful nostalgia, most of Branko’s sketches are also full of creativity, service, and passion for the precious things in life. He takes us back to an era when young intellectuals would gather in bookshops and cafes to browse the latest literary offerings and chew them over, like some rare gourmet delicacy that must be properly dissected before digesting. The scenes are famous restaurants, hotels, and ceremonial gatherings, where something of nineteenth century elegance has been preserved. Some personages are immaculately tailored and mannered, while others leave as their calling card their strength of character.

For many the road into exile came via the camps for former Chetniks and displaced persons in Italy and Germany. Others were more recent refugees from the breakup of Yugoslavia in the 1990s. Constantly brooding under the surface are the twin specters of war and communism, which have also haunted the Serb diaspora in the US for much of the Twentieth Century and beyond. This has made for complicated lives, but interesting stories of self-made Serbian Americans, often remaking themselves.

Branko himself, is just such a character. A successful journalist and college professor, his urbane charm and intellectual sharpness are grounded in boundless optimism and good humor. Yet he retains his insatiable appetite for life and his relentless productivity. He draws upon his diverse acquaintanceship of many years and offers us sketches that reveal both the outward façade and the inner superstructure. Yet the sketches are themselves historical documents. People not only live in a set time and place, but history also sculpts them along the way. As with almost all émigré groups in the US, certain aspects of Serb culture have been preserved better in the diaspora than in their original home. Now to return to a home that has also changed with time involves both pain and pleasure.

So, in many respects, for all his focus on the Serb roots of his many friends and acquaintances, Branko gives us also the universal American story. It is one of finding yourself in a foreign environment and making the best of it. It means choosing to retain certain key aspects of your unique national identity, but also letting go at the same time. It remains unclear whether these are American Serbs or Serb Americans, but they have all navigated an original path through difficult cultural choices and remained proud of what is right, without surrendering to blind nationalism or losing their humanity.