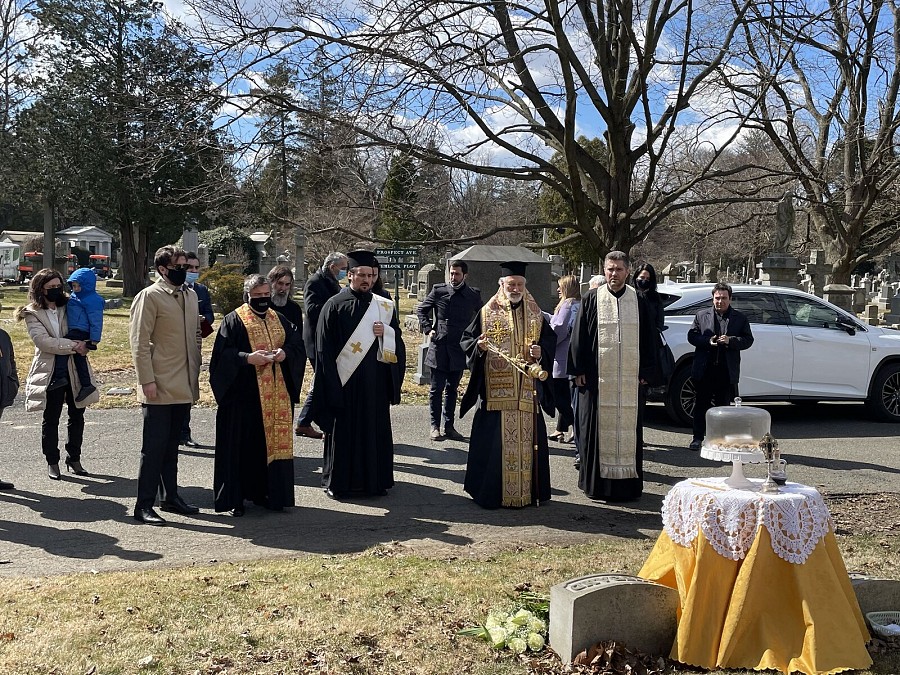 On Sunday, March 14, 2021, His Grace Bishop Irinej of Eastern America, at Woodlawn Cemetery in the Bronx, in New York, with the concelebration of Protopresbyter Djokan Majstorovic, Presbyter Milan Dragovic and Protodeacon Milos Zdralic, served a memorial service at the grave of Mihajlo Idvorski Pupin.

The Consul of Serbia in New York, Mrs. Olgica Vlacic, together with representatives of the Embassy of Serbia from Washington, DC, laid flowers at the grave of Mihajlo Pupin and his wife Sara Catharine. Numerous distinguished visitors to Woodlawn Cemetery, Orthodox Serbs and others, local and international, regularly pay their respects at the grave of this great son of Serbia.

Joining a rarified roster of 2,500 sites nationwide, including our St. Sava Pro-Cathedral in Manhattan, Woodlawn Cemetery, one of the largest cemeteries in New York, was designated in 2011 as a National Historic Landmark. Located in the Woodlawn area of the Bronx, Woodlawn Cemetery was opened during the Civil War in 1863. Today it is an oasis in an urban setting, with more than 310,000 individuals interred on its grounds. This cemetery attracts over 100,000 visitors from around the world each year. The National Park Service describes the cemetery as “a popular final resting place for the famous and powerful,” such as Princess Anastasia of Greece and Denmark; authors Countee Cullen, Nellie Bly, and Herman Melville; musicians Irving Berlin, Miles Davis, Duke Ellington, W. C. Handy, and Max Roach; along with businessmen, such as shipping magnate Archibald Gracie and department store founder, Rowland Hussey Macy, and philanthropist Augustus Juilliard, who established the Julliard School of Music.

Following the memorial service, Bishop Irinej addressed the faithful and among all else, stated “And as you can see, Mihajlo Pupin is not at all forgotten and, as long as ”memory eternal" is sung he lives, because he who abides in the eternal memory of the living God is not dead and death can never overcome him. His works, scientific and literary works are known, his life is well known, his charitable actions and his mercy are known. On this occasion, I would choose to focus on one point in his life, that being the point which brought him first to Prague and then to New York, where he lived, worked, was educated and formed himself as a man, and through his longing and desire to discover light, and as a believer of our Serbian Orthodox Church, that which is most important. We know that God is Light, and where God’sexistence shines forth, that light must reign, and there where it shines and where God is present, there is eternal life, life which knows not the setting of the sun. Thus, our Mihajlo could never have discovered all that he discovered, all that he gave to humanity, even certain innovations that bear his name, had he not sought first and foremost the living God, i.e., had he not sought enlightenment. For God is the light of this world, and He revealed Himself in that light, and in that light which He revealed, the same can never be extinguished…”

After the homily of His Grace in memory of Mihajlo Pupin, addressing those gathered in honor of the 86th anniversary of Pupin’s repose were Consul Mrs. Olgica Vlacic, and thereafter Mr. Dragan Vujosevic, President of the Serbian National Defense from Chicago, which was founded by Mihajlo Pupin.