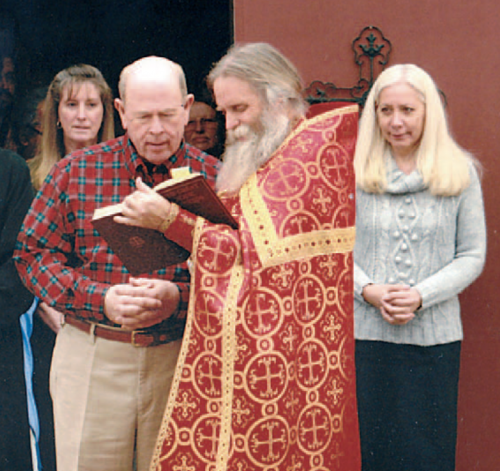 Our most beloved Priest, Fr. James Barfield reposed in our Lord on Wednesday, December 2, 2020.

Fr. James was born in Florida on Aug 11, 1953. He was raised Lutheran and loved Jesus Christ as a youth. He longed to know the truth about God and he did much searching. He joined different Christian organizations and helped feed the poor and help the helpless. He discovered the Orthodox Church through the St Herman of Alaska Serbian monastery in Platina California.

He was baptized in 1988 and did missionary work in San Francisco feeding hundreds of people daily with his cooking.

Fr. James met and married Popadija Nino on July 18, 1993, and had their son Demetry on June 16, 1995. Demetry was the joy of their lives.They all moved to Chico, California, and had a small mission there for several years bringing many souls to orthodoxy with a bookstore and chapel.

Fr James was ordained to the Diaconate on April 13, 2003, and the Priesthood the next day by His Grace Bishop Longin of Serbian Orthodox Church.

He was assigned to the Reno parish shortly after that and was the Priest for St John the Baptist Serbian Orthodox Mission.

He worked tirelessly for God and was missionary-minded in all things bringing many souls to our Lord. He also did ministry at the Lovelock Prison in Nevada.

Fr James was available to all of his parishioners any time of the day or night. He loved everyone and saw each human being as God’s creation.This last year the community obtained another mission in Carson City, Nevada. Being the first Orthodox Church in Carson, the capital of Nevada. St Sebastian Serbian Orthodox mission. The community has both missions now and many new souls have come to Christ.

Fr. James had many spiritual children all over the world. He always put God first in everything and his joy was being a missionary and spreading the good news. Watch Fr. James sermons on this video link: https://stsebastianandstjohn.org/videos/

His parishioners and the entire Western American Diocese have been so blessed to have known him.

He will be greatly missed and will live in the hearts of his parishioners forever.

He has finished the race and now receives his heavenly reward.