A Wonderful Assembly of all the Orthodox

On Saturday, August 31, 2019, the second day of the Diocesan Days and celebration of the 800thAnniversary of the Autocephaly of the Serbian Orthodox Church, began with a most magnificent pan-Orthodox Hierarchical Divine Liturgy officiated by Metropolitan Joseph of the Antiochian Archdiocese with the concelebration of Their Eminences Metropolitan Nicolae (Romanian Orthodox Metropolia of the Americas), Metropolitan Savas, (Greek Orthodox Archdiocese), Archbishop Benjamin (OCA), Archbishop Peter (ROCOR); Their Graces Bishop Longin of New Gracanica-Midwestern America, Bishop Mitrophan of Canada, Bishop Daniel of Santa Rosa (Orthodox Church in America), Bishop Grigorije of Dusseldorf and Germany, Bishop Teodisije of Kosovo and Metohija, Bishop Irinej of Eastern America, Bishop David of Stobi (Archdiocese of Ohrid), Bishop Sergije of Bihac and Petrovac, Bishop Kirilo of Buenos Aires, Bishop Dimitrije of Herzegovina and host hierarch Bishop Maxim of Western America.

The service began with the blessing of the recently completed frescoes which now, together with the mosaics, adorn this beautiful church dedicated to the first Serbian Archbishop, Saint Sava. Indeed, the clergy and faithful celebrating the liturgy, surrounded by the awe-inspiring iconography, the ancient church melody sung by the Prizren seminarians, felt more like they were transported in time and space to some distant Orthodox land, rather than Los Angeles, one of the most populous metropolis' in the United States.

Later, during the banquet in the main church hall, Bishop Grigorije would comment, “This beautiful church and this wonderous assembly, an assembly of all the Orthodox without exception, is the most beautiful answer to the love which Saint Sava has for our people and our greatest gift to him for all that he has given to us.“ Hierarchs representing all the jurisdictions offered words of greetings during which Metropolitan Joseph gave a most thunderous address in which he shared his love for Serbia and the Serbian people. He visited Serbia three times in his life, he stated, and during his visits to Kosovo and Metohija and the holy monasteries there he was convinced that “this is the land of Serbia, an Orthodox land and Kosovo will always remain Serbian!“

In attendance and offering his words of greeting was also Mayor of San Gabriel Jason Pu. During the rich program prepared for this occasion, Zeljka Cvjetan Gortinski recited excerpts from St. Sava's infamous Sermon on the True Faith which he delivered at Monastery Zica in 1220. Also, folklore groups from Las Vegas and the host parish's Kalemegdan performed; the much-talented cellist Popadija Biljana Bojovic offered a number of musical selection. Two talented and devout young Orthodox Christians, Anastasija Krsic and Daniel de la Vega, delivered their orations as the finalists of the 2019 St. Nikolai of Zicha Oratorical Competition. The Order of St. Sebastian in the First Degree was granted to Rick Quinn of Opolo Vineyards. On the occasion of this year's 800th anniversary, Rick Quinn produced a special wine for this occasion aptly called “Autocephaly“ which was served during the banquet. The Order of St. Sebastian in the Second Degree was granted to Dejan & Ljiljana Miskovic, Mladen Gusa, Simeun & Dragana Radojevic, and Vidosava Chenich. Gramatas were given to Marica Blagojevic, George Drndarski, Steva Nikolic, Milorad Todorovic, and Iliya Cheyovich. At the very conclusion of the banquet program, emcee Fr. Nikola Ceko, offered a moving address in which he, on behalf of the clergy and faithful of the Western American Diocese, expressed his gratitude, esteem, and appreciation for the many sacrifices and dedicated love His Grace Bishop Maxim has for this diocese and the flock entrusted to him. His moving words were met with thunderous applause as everyone stood to sing the Many Years.

Following the banquet, the Diocesan Annual Assembly was held in the smaller hall upstairs with the participation of all diocesan clergy, monastics, and delegates. During the meeting, reports were heard from the diocesan bishop, treasurer, audit board, and representatives of various other organizations and groups. Among the different topics raised and discussed Fr. Damascene, abbot of St. Herman of Alaska Monastery in Platina, presented the Assembly with an outreach program directed to Native Americans.

During dinner which followed Vespers, the seminarians from the Prizren Seminary performed a number of songs. Later, music, dancing, and fellowship continued throughout the evening.

The Diocesan Days celebration of the 800th Anniversary of the autocephaly of the Serbian Orthodox Church will continue on Sunday, September 1, 2019. 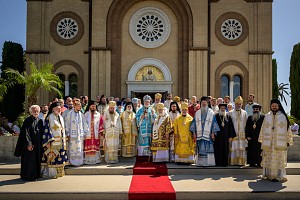