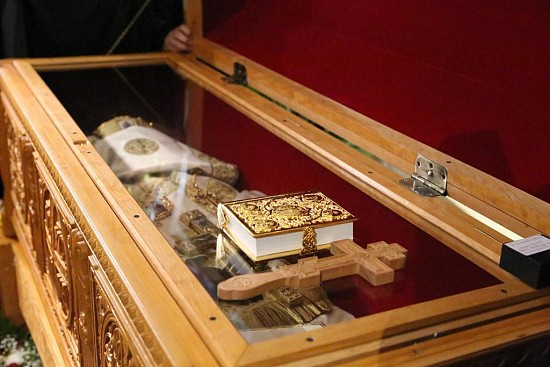 ON THE OCCASION OF THIS YEAR’S FEAST DAY
OF ST. MARDARIJE OF SERBIA, LJESAN-LIBERTYVILLE,
ALL-AMERICA AND ALL-ORTHODOX WORLDWIDE

That borders do not exist for Christ’s Church and His Saints has been and continues to be confirmed through the numerous examples during the two thousand year history of the Church.

It will be confirmed until the end of the world and time.

One of the blessed examples of the Lord’s limitless love and the breadth of the Orthodox Church, is this year’s celebration of the newly revealed St. Mardarije of Serbia, Ljesan-Libertyville, All-America and All-Orthodox.

The name and memory of the Saint, the new apostle of the Church of Christ, was celebrated this year from the Metropolitanate of Montenegro and the Coastlands, from Kornet the town of Ljsan, where he was born, to Studenica Monastery where he was tonsured, to his monastery of St. Sava in Libertyville where his incorrupt relics shine with the spirit of living faith. His name was celebrated from the king’s city of Cetinje to the emperor’s city of St. Petersburg, to the distant Australia and throughout South and Central America and Canada, Belarus, Ukraine, Moldavia, Serbia.

In glory of Christ’s Resurrection and the faithful witness of St. Mardarije the first celebration of the Saint was organized in St. Petersburg and Russia and the 100th anniversary since his departure for America from Russia (1917-2017) was commemorated on Sunday, December 10, 2017 at St. Metropolitan Peter of Moscow Church where the Divine Liturgy was served, the Slava kolach blessed and the first formal academia in Russia organized.

Commemorating the Saint and praying for his intercession this year, on his feast day, were also his blood relatives and ancestors, in their monastic dwellings and sisterhoods. Sister Mardarija Uskokovic who bears his name, she celebrated her name’s day in the ancient mother of all Serbian churches, the Pec Patriarchate Monastery. Her sister Jadranka, with her spiritual father Andrej Lemesonokom and the sisterhood of St. Elizabeth Monastery in Minsk in Belorus, offered a Slava kolach in honor of the Saint.

Bishop Longin of New Gracanica together with Russian hierarchs, clergy, monastics and the faithful people gathered at Vigil and the Holy Hierarchical Divine Liturgy, beside the Saint’s relics and offered their prayers, reading the Akathist and rejoicing in the day and feast.

Metropolitan Amphilohije and Bishop Kirilo together with their clergy and monastics and faithful people of South and Central America celebrated the Saint and sang spiritual hymns in his memory.

The students of the St. Petersburg Spiritual Academy sang for the first time the troparion and kontakion at the liturgy served by Hieromonk Atanasije Bukin at the Uspensky Church of the Academy. First year students of the renovated St. Petar of Cetinje Seminary, the 26th generation of the renovated school (2017-2022), celebrated the Slava with their professors and fellow students.

At the St. Nicholas Cathedral in Sremsky Karlovtsy the Divine Liturgy was served and the seminarians of the Seminary of Karlovatz and the faithful people venerated a part of the relics brought to this church by Bishop Longin.

In Mississauga, Canada, at the Synaxis of Serbian Saints Cathedral Church a pan Orthodox Divine Liturgy will be served and the faithful will venerate a portion of the relics in their first bishop of America and Canada on Saturday, December 16, 2017.

Professor of the Cetinje Seminary and the editor of the catechetical and educational Radio program Svetigora, Aleksandar Vujovic, visited on his feast day, Tuesday, December 12, 2017, some of the places where the Saint taught, served, preached and lectured during his life in St. Petersburg and thereby becoming a part of this city. He visited first the Spiritual Academy which the Saint completed in 1916, then the Faculty of Law, where he also studied. He met with professors and students, and spoke to them of St. Mardarije and chanted the troparion and kontakion in his honor.

On the same day Aleksandar Vujovic visited the Gymnasium of Petersburg, where St. Mardarije taught 105 years ago and, upon invitation of the school principal he will deliver a lecture on St. Mardarije on Friday, December 15, 2017. He also visited the Optina Pustyn Monastery where the Saint often served. It was decided to establish a Russian-Serbian Society brotherhood in St. Petersburg, which will bear the name of St. Mardarije Uskokovic.

Also celebrating the Saint were numerous tongues throughout the world, those who remember him and pray to him during these days.

The Saint will not forget them, for from his monastery in Libertyville in America he embraces and blesses them and many others worldwide, teaching them how to live and make sense and give meaning to their lives in charity and self-sacrifice through examples and labors.

The Saints rejoice today and those many prisoners, soldiers, orphan children, from Chisinau, St. Petersburg, Siberia, America, Serbia, to whom he selflessly gave of himself.

And many, many other known and unknown.

But St. Mardarije rejoices as well and his holy and incorrupt, lifegiving relics which bear witness to the conciliar unity of all in the resurrected Christ.

May the Lord, through the prayers of St. Mardarije and his holy life and example, bring all people of the world to an unbreakable community, where there will be no borders, but where all will rejoice, celebrating God and enter into the shoreless ocean of the Divine love of the Holy Trinity.

Holy Bishop and Father Mardarije pray to God for us!

Aleksandar Vujovic,
Professor of the Cetinje Seminary
and Editor of the Catechetical-educative Radio program Svetigora