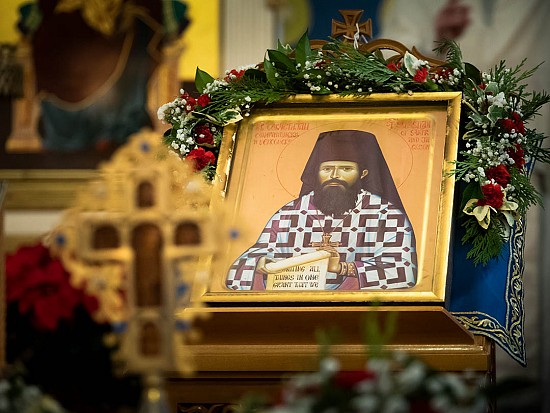 Saint Sava Church in Jackson, California, for the fourth time celebrated the feast day of its founder, Saint Sebastian of Jackson, an Apostle of America, in the 2018th year of the Lord, with great joy and love. Although on a week day, Friday, the church was filled with the faithful from various Orthodox churches and from various places of California, who all desired an encounter with the great man in whom God is well-pleased. Like last year, priests from a few neighboring Serbian and other Orthodox parishes gathered together for Divine Liturgy, but a special joy this year was brought by two guests from afar. One of them was Presbyter Miroslav Andrić from Kraljevo, a city near Žiča Monastery, where Saint Sava, the patron of Jackson’s church, was enthroned and where his archiepiscopal see was, and where Saint Sebastian, its founder, fell asleep in the Lord and reposed on its cemetery from 1940 until 2007. The other one was Deacon Simon Menya from Uganda, who is a student at Saint Vladimir’s Orthodox Theological Seminary in New York and is getting prepared to be involved, like Saint Sava and Saint Sebastian, in the missionary activity in his homeland. As a true man of God, Saint Sebastian calls all and gathers all around the Lord, without any worldly partiality and discrimination, so that all His children may be one in Him. After only three years since his name was inserted into the diptychs of saints, his church has been visited and his holy relics venerated by the pilgrims from all over North America as well as all other continents of the globe. Only three years later, the family of Jackson’s deputy sheriff celebrated Saint Sebastian as their family patron saint or Slava for the second time and this time they were joined by the local photographer Lazar Larry Angier, who was baptized and christmated earlier this year and who enjoys high reputation not only in his native region but throughout the fullness of our Church for his dedicated art work and unselfish contribution to capturing and depicting glimpses of its heavenly and eternal beauty. Among the most joyful celebrants was a small Sebastian, who was brought to the church from Sacramento by his parents, Moldovan father and American mother, in order to celebrate his first Name Day together with his namesake and patron saint. At this occasion, the parish also commemorated the fourth anniversary of ordination of its deacon, Dragan Stojanovich. One of the oldest and most respected families of Jackson is the Vukovichi, who originally came from Herzegovina. Interestingly, one Vukovich on the other side of the ocean, a young lawyer from Belgrade, Serbia, started celebrating Saint Sebastian of Jackson, in addition to his traditional, ancestral Slava, as a special Slava or home and family patron saint. Let us also say that the Jackson’s shrine was blessed since the previous celebration of its founder with the particles of holy relics of Saint Mardarije of Libertyville, who is a founder and pillar of our Church in North America together with Saint Sebastian of Jackson, as well as of Saint Sebastian the Martyr, on whose feast day Saint Sebastian of Jackson was tonsured a monk and was named after him.

This festive joy in Jackson extends to the first Sunday in December, the so called Founders’ Day, when Saint Sebastian is gratefully commemorated, for years now, together with other founders of Saint Sava Church. This year specifically, the Jackson Parish hosted the patronal feast of Saint Sebastian Press, the prolific publishing house of the Western American Diocese, which was represented by Protinica Radmila Bojović from Los Angeles, as well as the patronal feast of the Diocesan Sisterhood (KSS), the Entry of the Most Holy Mother of God into the Temple of Jerusalem (each year it is celebrated in a different parish on the nearest Sunday), which was represented by President Laura Burge from Los Angeles and Kuma Danica Pavlov from Jackson, together with numerous members from various parishes. The Divine Liturgy was presided by the diocesan archpastor, His Grace Bishop Maxim, and concelebrated by Abbot Damascene of Saint Herman of Alaska Monastery in Platina, California, and the parish clergy, both retired and active. After the Sunday Liturgy, a meal was served, which included the bakalar (salty dried cod) fish, which is traditionally prepared on the Founders’ Day according to an old recipe from the Bay (Boka) of Kotor, where the parents of Saint Sebastian and many of the parish founders came from to America. Abbot Damascene read unpublished excerpts from Saint Sebastian’s letters and reports, which will be part of a new book he is preparing on Jackson’s saint, and Popadija Biljana Bojović performed a brief medley of church hymns on cello. Bishop Maxim brought with him a draft copy of another capital publication by Saint Sebastian Press, The Serbian Christian Heritage of America, which should be finalized in the beginning of next year, in honor of the 800 years since receiving the autocephalous status for our Church. This great anniversary is scheduled to be commemorated on diocesan level during the Labor Day Weekend and annual Western American Diocesan Days, at Saint Sava Parish in San Gabriel (Los Angeles area), which was also initially founded (at a different location though) by Saint Sebastian Dabovich. Saint Sava’s and Saint Sebastian’s community in Jackson is also expecting a significant anniversary next year – 125 years of existence. May all these great upcoming days bring us ever closer to the Giver of all good gifts, who is wonderful in His saints. O Holy Father Sebastian, pray to God for us!