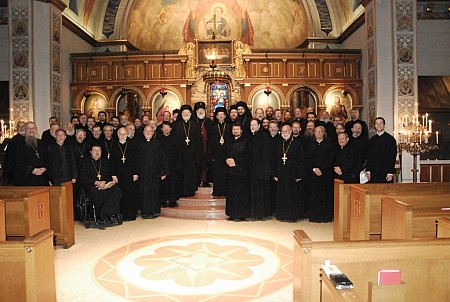 The guest speaker for this event was Rev. Dr. John Chryssavgis, Archdeaon of the Ecumenical Patriarcate, and author of 25 books and numberous articles in several languages on the Church Fathers and Orthodox Spirituality.

Fr. Chryssavgis spoke on the topic, “The Sacrament of Confession: Contemporary Pastoral Challenges and Questions”

The three-day retreat was well attended by clergy from five Orthodox jurisdictions on the West Coast. The retreat began on Tuesday, November 27th in the afternoon at the Sacred Heart Retreat House and St. Joseph Campus in Alhambra, and concluded on Thursday, November 29th with the Hierarcichal Divine Liturgy and a luncheon which were held at the Saint Steven's Serbian Orthodox Cathedral in Alhambra.