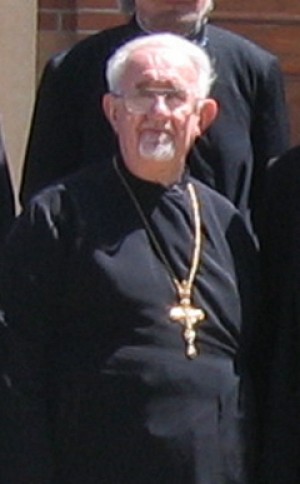 Born on Annunciation, April 7th, 1935, to parents Pavle and Marija Majerle in Dreznica, Serbian Lika, former Yugoslavia. As a young child, he learned about persecution, loneliness, refugee camps and the struggles of war. He was witness to the largest ethnic cleansing campaign of Serbs. With the guidance of his parents, he learned of Christ through life and prayer. He decided to dedicate his life to Christ and left Dreznica for St. Sava Seminary at the Monastery Rakovica just outside of Belgrade, Serbia in 1952. He was ordained Deacon on Nov 27th 1959 and priest on Nov 28th, 1959 after marrying his love, Jelena (nee Zakula) on Nov. 22, 1959.

He served in his homeland as the parish priest of St Georgije church in Otocac, Lika for 10 yrs, up until his departure from communist Yugoslavia. He left through the Serbian Church in Trieste, Italy with the help of +Dragoljub Vurdelja. He arrived in Sudbury Ontario, Canada on June 24th, 1970 and was placed by his uncle, +Very Rev. Djuro Vukelich, to be the parish priest of Sts. Petar and Paul church in Sudbury.

In January of 1974 he arrived in Cleveland, Ohio as the new parish priest at St. Sava Serbian Orthodox Church. At that time liturgy was served in the Bohemian hall on Broadway up until 1976 at which time the social hall was built on the property on W. Wallings Rd. From 1976-1982 holy liturgy was served in this building while Fr. Djuro worked tirelessly to rally support and raise funds to break ground for the building of the new church (Aug. 28th, 1980). His dream and hard work came to fruition with the completion and consecration of the new St. Sava Church in Broadview Hts, OH on June 13, 1982.

His dreams didn’t stop there. He was determined to make the most beautiful Serbian complex in North America and he succeeded. The St. Sava Serbian Orthodox Complex on W. Wallings Rd. is home to a beautiful church, two social halls, a large pavilion, 3 soccer fields and the first Serbian Orthodox cemetery in Ohio. He was also instrumental in the building of St. Mark’s Serbian Orthodox Monastery in Sheffield Village, OH. His works did not go unnoticed and were no secret to his +Bishop Iriney Kovacevic who ordained him Archpriest (protojerej) on the feast of St. Sava in 1979 and then as Stavrophor (Stavrofor) on June 12, 1982.

His participation in in the life of his parish was whole hearted and unselfish. He served the St. Sava parish for a full 33yrs up until his retirement in September of 2007. While in retirement he enjoyed to participate in liturgy at various Serbian Orthodox parishes in NE Ohio. He departed this earthly life for eternal life on Nov. 22nd, 2014, as fate would have it, on the 55th wedding anniversary with his beloved wife Jelena. Fr. Djuro is survived by his wife Jelena, sons, Pavle (Maria) and Jovan (Angela), grandchildren Djuro, Pavle, Aleksija, Gojko, and Ljubica all of Parma, OH, nephew Dusko (Mira), Nieces Milena (Sveto), Ljilja (Brane) and Gordana (+Milan) as well as many grand nieces, nephews, kumovi and friends. May his memory be eternal.