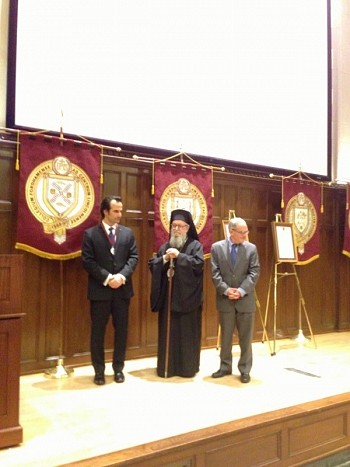 New York City, NY - Fordham University and members of the Orthodox Christian community celebrated a milestone on Nov. 18 with the installation of Aristotle Papanikoalou, Ph.D., as Fordham’s first Archbishop Demetrios Chair in Orthodox Theology and Culture.

“I am honored to be the inaugural chair holder and I hope my work extends the remarkable legacy of Archbishop Demetrios,” said Papanikolaou, a professor of theology and the senior fellow and co-founder of Fordham’s Orthodox Christian Studies Center.

The chair is the result of a $2 million gift from Mary and Michael Jaharis, of the Jaharis Family Foundation, Inc., which provides grants to arts, cultural, and religious institutions. Its establishment marks a first for Orthodox studies in the Western hemisphere and ensures the discipline’s perpetuity at Fordham.

“This is the first chair in Orthodox theology at any university in the country,” said George Demacopoulos, Ph.D., professor of theology and co-founding director of the center. “This chair is in many ways one of the cornerstones of the Orthodox Christian Studies Center, so its holder will always be fully integrated with the work and mission of the center.”

Moreover, by virtue of the its existence within Fordham, the chair will promote ecumenism and strengthen dialogue between the Eastern and Western Christian churches—a central mission of the center, which includes such events as the Patterson Triennial Conference in Orthodox/Catholic Relations.

“To have the first chair in Orthodox theology housed in a Jesuit Catholic institution is important symbolically and practically as a sign of advancement for Orthodox-Catholic dialogue,” Demacopoulos said.

The chair is named for His Eminence Archbishop Demetrios, primate of the Greek Orthodox Church in America. Archbishop Demetrios presented the inaugural lecture when the annual Orthodoxy in America Lecture Series began in 2004, and, in 2007, received an honorary doctorate of humane letters from Fordham.

In addition to being leader of the Greek Orthodox Archdiocese’s 1.5 million members in America, he is a distinguished scholar of Orthodox Christian studies. Trained at Harvard and the University of Athens, he was the Distinguished Professor of Biblical Studies at Holy Cross Greek Orthodox School of Theology, where he met and taught Papanikolaou.

“Having him as a student created quite a heavy workload for me,” Archbishop Demetrios said. “He’s a person with a sharp mind, intuition, and was ruthless in asking questions. But it was also a joy… He is someone who has shown what it means to advance knowledge, communication, and a real human ecumenical spirit.”

A Fordham alumnus (FCRH ’88), Papanikolaou is a prolific author and eminent scholar. He is a senior fellow at Emory University’s Center for the Study of Law and Religion and the recipient of a Louisville Institute Sabbatical Grant for Researchers, which he used to explore how Eastern Christian notions of virtue understand the plight and healing of traumatized combat veterans.

“Aristotle is one of those theologians who has the ability to interpret culture in a profound way and tie it into the faith,” said Father Alex Karloutsos, protopresbyter of the ecumenical patriarchate, and a longtime friend of the Papanikolaou family. “He understands the medium he has to use in order to convey certain truths.”

As the Archbishop Demetrios Chair, Papanikolaou will work to advance the study of the historical relationship between Orthodox Christianity and Hellenism. His inaugural lecture at the installation ceremony discussed how Eastern Christian thinking on virtue offers resources for illuminating and transfiguring the human experience of violence.

Founded by Papanikolaou and Demacopoulos in 2007, the Orthodox Christian Studies Center is the first university-based site for Orthodox Christian Studies in the western hemisphere. Last year, the Center received a prestigious challenge grant from the National Endowment of the Humanities (NEH), one of the country’s largest funders of humanities programs. The $2 million endowment raised by a three-to-one matching grant will fund the center’s Distinguished Scholar-in-Residence program and Dissertation Completion Fellowship program.

“This [center] is where the two faiths—the Orthodox East and Christian West—come together as they do nowhere else,” said Joseph M. McShane, S.J. president of Fordham. “They come together not only to think, exchange, and engage in dialogue, but also to model for the world how the Christian family can and should be, with and among itself. And it’s made possible because of the dream Telly and George had and the support of Michael and Mary Jaharis and others.”

Founded in 1841, Fordham is the Jesuit University of New York, offering exceptional education distinguished by the Jesuit tradition to more than 15,100 students in its four undergraduate colleges and its six graduate and professional schools. It has residential campuses in the Bronx and Manhattan, a campus in West Harrison, N.Y., the Louis Calder Center Biological Field Station in Armonk, N.Y., and the London Centre at Heythrop College, University of London, in the United Kingdom.