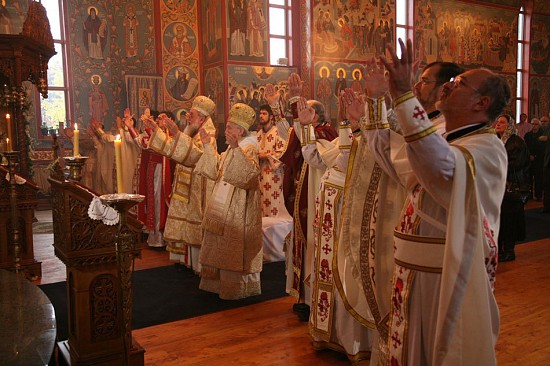 On November 4th and 5th, there was a 2-day celebration to commemorate the oldest Serbian Orthodox Church in eastern Canada. On Saturday morning a large number of parishioners attended a memorial service in the church. At this service, they prayed for their departed family members as well as for the souls of the departed parishioners and women in the “kolo sestara.”

Then, a group of parishioners visited the site where the first church was built and consecrated in 1917.  Multiple generations were represented in this crowd; teenagers to a 97-year-old parishioner.  For some, it was a history lesson and for others, it was a time to reminisce about days gone by.  They were able to enter the building which was originally built as the Serbian Community Centre.  It was remarkable to see that some aspects of the hall remained intact.  Parishioners shared stories and memories and it was a wonderful trip down memory lane.

On Saturday evening, a vesper service was served in the church.  Following vespers, the clergy and parishioners ate dinner at the hall.  They enjoyed a display of the 100-year timeline that was artistically exhibited in the lower hall.  Following dinner, the guests enjoyed a heart-warming concert which featured the church choir, S.N.E. KOLO, the St. Nicholas Folklore Groups, and the “Tamburica” Orchestra from Niagara Falls.   The hall was filled to capacity and the performers were greeted by cheers and thunderous applause.  The concert included thoughtful commentary and visuals to complement the narrative.  Many thanks to all who performed and to Vera Jovanovic and her committee for organizing the concert.

On Sunday, the Episcopate of the Canadian Diocese, his Grace Dr. Mitrofan and his Grace Bishop Longin of the Diocese of New Gracanica-Midwestern America with ten priests and two deacons served the Holy Hierarchical Liturgy.  On this special occasion, Deacon Radovan Kodic was ordained as a priest to the joy of hundreds of believers in attendance.  Bishop Mitrofan addressed the faithful, congratulating them on this great jubilee and invited everyone to be as active as possible in the life of the church.  He wanted to have our holy temple for hundreds and hundreds of years until the arrival of the Lord and Saviour, Jesus Christ.

The celebration continued in the capacity-filled hall for the banquet and program.  There was a long head table set up for the clergy, representatives from other parishes, members of local, provincial, and federal government, the Consul General of Serbia, and other special guests.  The MCs, who were also the chair and co-chair of the reunion committee were George Lukic and Snez Popov.  The speeches began with the President of the Church-School Congregatrion Rajko Đurđević  who shared the highlights of the church’s history.  He noted its direct connection to two recently canonized and glorified Serbian Saints.  St. Mardarije consecrated the church in 1917 and St. Sebastian served as parish priest for 4 months while the parish awaited the arrival of a permanent priest.  He thanked the parish priest, the executive, the circle of sisters and everyone who helped and worked so hard over the years.  He greeted all the guests, especially those who came from other parts of North America.  On this special occasion, on the proposal of Bishop Mitrofan, the first degree “Order of St. Mardarije” was presented to Rajko for his many years of unselfish work for the church.

Very Reverend Vojislav Pavlović gave an outstanding speech which we hope to translate into English so that everyone is able to understand it.  He thanked our Bishops and priests and addressed his parishioners and guests.   He sincerely thanked the church president Rajko Djurdjevic and the church executive who have been working tirelessly for the good of our church for many years.  He also praised the work of the sisters who have contributed immensely to our church and community.  He also acknowledged the work of the choir, Serbian school and folklore groups.  Prota Voja emphasized that we should remember with joy the wisdom and determination our founding fathers and ancestors.  They laid the foundations of the first Serbian community based on their love for their faith and homeland.  At the same time, we pray to the Lord to give strength to this current generation who were blessed to organize such a great jubilee.  He especially emphasized the role of our brothers and sisters from the sister church on Nash Road who were and remain an integral part of the spiritual community in this city.
Finally, Bishop Longin addressed the audience. The Bishop stressed the importance of this church and municipality for the entire Diocese of Canada and the Serbian Church as a whole on this continent.  He pointed out that he has been joyfully coming to this parish for 20 years and that he always leaves with good impressions.  He invited us to protect our faith and prays that future generations will recognize us in the chain of existence of the Orthodox Church.

The ‘Kolo Srpski Sestara’ president Milka Čulić and Honorary President Milanka Zarić received official recognition from the St. Nicholas Church.  It is a small sign of gratitude to them and all of the women and men who work tirelessly for the church.

Glory to God, it was a beautiful celebration on so many levels.  Thank you to all who helped in some way to the success of the weekend.