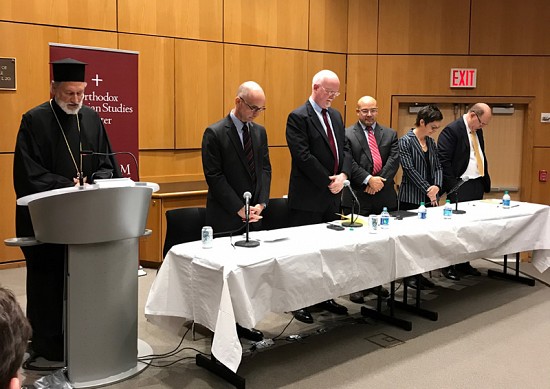 His Grace Bishop Irinej of the Serbian Orthodox Diocese of Eastern America opened the evening with prayer.

The expert panel reviewed American Evangelical and Russian Orthodox personalities who are forming alliances to support “traditional values” against "political liberalism," and each for their own purposes:  American Evangelicals are attempting to influence the political and cultural landscape of the US; while the Russian Orthodox are looking to forge a new East-West alliance. This panel session explored the political, social, and religious dimensions of this new alliance and its geo-political implications.

The Orthodox Christian Studies Center of Fordham University in New York City, under the leadership of professors Aristotle Papanikolaou and George Demacopoulos, connects an archipelago of cultures, religious traditions, and academic disciplines to advance awareness and knowledge of Orthodox Christianity in public discourse.

The Center supports scholarship and builds intellectual community through wide-ranging initiatives including: National Endowment for the Humanities (NEH)-supported research fellowships, the Patterson Triennial Conference on Orthodox/Catholic Dialogue, the annual Orthodoxy in America Lecture, and an undergraduate minor in Orthodox Christian Studies.

The Orthodox Christian Studies Center of Fordham University works closely with the Theology Department and the Center for Medieval Studies in order to offer an interdisciplinary approach to the study of Orthodox Christianity. The Center collaborates nationally and internationally in institutional partnerships with the Black Sea Networks at Columbia University, the Sacred Arts Initiative of St. Vladimir's Orthodox Seminary, and the Volos Academy for Theological Studies.