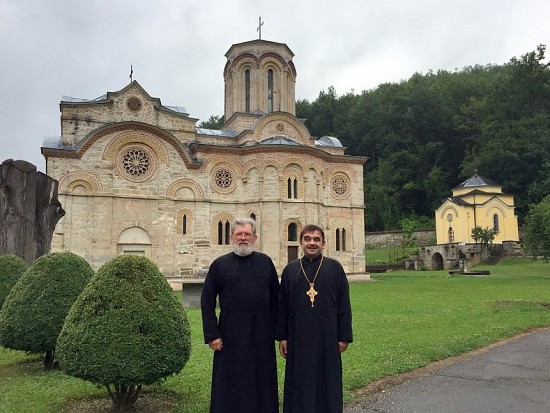 PILGRIMAGE TO SERBIA AND LIKA CROATIA 2015

A small group of American Serbs from Kansas and Iowa, led by Father Aleksandar Bugarin of Kansas City, embarked on a pilgrimage to the “Old Country” from June 22 – July 5, 2015.  This pilgrimage allowed us the opportunity to grow spiritually, learn some church history, experience the culture of our ancestors, and to meet a few recently discovered relatives.

Our trip began in the Vojvodina province of Northern Serbia, with an exclusive tour of Novi Sad by Father Zoran and Ksenija Milinkovic. We experienced our first taste of Serbian food and drink at a restaurant that evening at the Petrovaradin Fortress. The next day we traveled north to Srbobran and Sombor to meet relatives for the first time.  This experience was highly emotional for all. We were welcomed with open arms, lots of hugs and kisses and of course, lots of food and rakija!

The next few days were spent visiting many beautiful monasteries, beginning with the Fruska Gora Mountain region. We learned that the town of Sremski Karlovci was known for being the seat of the Serbian Orthodox Church and the Patriarch still retains the Metropolitan of Karlovci in his title.  Monastery Krusedol is the oldest monastery in this region and is the endowment of the last Serbian despot Durad Brankovic. At Monastery Grgeteg we were able to listen to the nuns doing a prayer service.  We venerated the relics of the holy great martyr Throdore Tiron at the Monastery Hopovo.

We then headed south to the Sumadija region of Serbia. Monastery Manasija, founded by Despot Stefan Lazarevic, has an incredible fortress built around it.  High walls and eleven towers were built to protect it however, over the centuries of Ottoman rule, the monastery lost many original frescos.  Prince Lazar of Serbia was buried at the Monastery Ravanica after being killed at the Battle of Kosovo.  In the town of Krusevac we walked through the remains of Prince Lazar’s fortress and visited the Lazarica Church.  In the Monastery Ljubostina are the relics of many widows of those who lost their lives in the Battle of Kosovo, including that of Prince Lazar’s wife, Milica. Monastery Zica, painted in bright red to symbolize the blood of the martyrs of the early Christian church, was built by the first King of Serbia, Stefan, and Saint Sava.

Monastery Studenica, founded in the year 1190 by Stefan Nemanja, was the oldest monastery we visited. As we has seen before, fortified walls were built to protect the monastery but enemy assaults, fire, and an earthquake damaged the structures and have necessitated restoration over the centuries.  We were very blessed that during our visit, the sarcophagus of both Saint Anastasia and Saint Simon were opened for us to venerate those very important relics. We visited the Kilsura Monastery built in the early 13th century on the left bank of the Moravica River.

For Vidovdan, we attended Divine liturgy at Monastery Blagovestenje. It was a beautiful service with many people in attendance.  Next we drove to the town of Kragujevac and went to the memorial park for all those that died in the massacre October 19-21st, 1941.  Next we headed north to Topola to visit Oplenac, the Mausoleum of the Karadordevic Dynasty and St. George Church.  This building is famous for the over 40 million mosaic tile depictions over most every inch of space.  We visited Monument Park and saw the Soviet Veterans of War Memorial and the Monument of the Unknown Soldier.

We arrived in Plaski, where we would lodge for the next three days.  We visited the beautiful and famous Plitvice Lakes.  This national park is famous for its sixteen lakes and numerous waterfalls.  From there we headed through Gospic in the Lika region of Croatia and onto Smiljan, the birthplace of Nikola Tesla.  There is a restored church of Sts. Peter and Paul next to an old cemetery and mass grave memorial to Serbs killed during the WWII conflict.

The next day we left Plaski and headed back towards Belgrade, stopping at the Jasenovac WWII Concentration campsite where many Serbs, Jews, and Gypsies were exterminated.  We lit candles at a couple of areas praying for the souls of those killed and then headed back to Belgrade.

We had dinner on Skadarlija Street and were entertained with music and singing.  The next day we visited the Patriarchate and received a blessing from Patriarch Irinej.  We visited the Kalamagden Fortress and Ruzica church on the inside of the fortress.  There is a chandelier in the church made out of swords and bullets.  We did a City Tour by Bus of Belgrade which showed us the main attractions of the city.  We visited St. Marko and St. Sava churches on our last day together. We haven’t the words to express our feelings, but our hearts and minds are filled with great memories and a longing to someday return to Serbia.