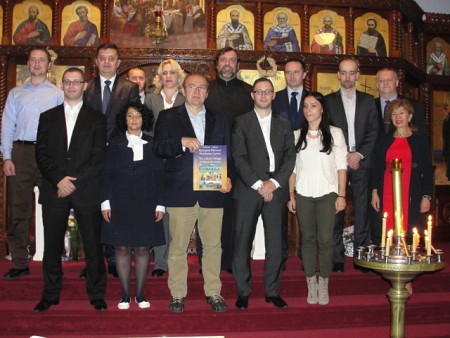 Philadelphia, PA - Prime Minister of Republika Srpska, Zeljka Cvijanovic and Finance Minister Zoran Tegeltija were in Philadelphia on the fifth day of their US visit. They came to the city upon invitation from the “Tesla Science Foundation” and Foundation President, Nikola Loncar. Namely, this science foundation will mark two centuries since the arrival of the first Serb to America, which occurred in the city of Philadelphia.

The first Serb to arrive in America was Djordje Sagic, known later as George Fisher and was founder of the first Serbian society, a number of churches and Serbian organizations.

The President of the Foundation, Nikola Loncar, noted that an impressive number of Serbs contributed to the development of America and the entire world, and that there is a significant number of Serbs living here today.

“Our goal is to arouse the interest for cooperation with Serbs, both here and in the Homeland, and that through positive gatherings and events we might connect our people on all continents. We are very happy that the delegation from the Government of Republika Srpska took time to visit us in the city where this celebration will take place and their promise that they will contribute to the organization,” said Loncar.

Members of the delegation visited the park where the celebration will take place and learned of the work being done by members of this foundation towards the realization of the project.

Cvijanovic emphasized that this will be a great event which will send a positive message of the unity between the Serbian and American people, and that Philadelphia will become one of the key places for the future work of the government of Republika Srpska through the representatives offices which were opened in Washington DC a few days earlier.

In the evening hours the delegation visited the St. Nicholas Serbian Orthodox Church, the only place of gathering for Philadelphia Serbs. Fr. Milorad Orlic said that he was extremely happy to hear of the future cooperation on such an important project for all Serbs in America, and that the support of Republika Srpska is of a great moral significance for the Serbian diaspora.

The foundation invites all people interested in preserving Serbian traditions, organizations, parish representatives, government representatives, and all who are able to come to Philadelphia on Vidovdan 2014 and thereby contribute towards this unique idea.