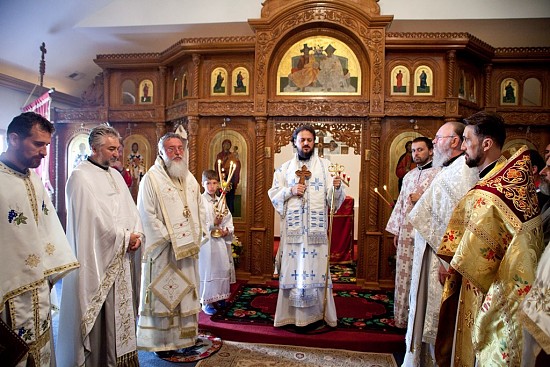 CONSECRATION OF ST. JOHN THE BAPTIST CHURCH IN COLORADO

In a rite of Consecration and Divine Liturgy led by His Grace Bishop Dr. Maxim of the Western American Diocese and His Grace Bishop Longin of the Midwestern American Diocese, St. John the Baptist community was officially recognized as the first Serbian Orthodox Church ever to serve Colorado. Serving clergy from other parts of our diocese as well as other jurisdictions were: V. Rev. Dragomir Tuba Episcopal Dean from Phoenix AZ, V. Rev. Boris Henderson ROCOR from Denver, V. Rev. Sasa Petrovic from Omaha NE, Rev. Fr. Radovan Petrovic parish priest, Rev. Milan Dragovic from Salt Lake City UT, Rev. Milan Unkovic from Las Vegas NV, Deacon Vladan Radovanovic and Prizren seminarians Nikola and Strahinja. Church was filed with faithful people and many of them received Holy Communion from the hand of Bishop Maxim. During the Great Entrance, His Grace Bishop Maxim elevated Fr. Radovan Petrovic to the rank of Proto-presbyter (Protojerej) making him the youngest Proto-presbyter in the US.  At the end, Bishop Maxim emphasized the importance of the unity, hard work and sacrifice for church and community, thanking and congratulating Fr. Radovan and all the parishioners for their labor. The consecration was followed by a banquet during which parishioners acknowledged the hard work and wide-ranging contributions of area Serbs who had helped realize the longtime dream of a church of their own. For this reason many Episcopal Awards were issued, including a medal of St. Sebastian of the First degree to Mr. Bogdan Vunovich, a native Coloradan and long time parishioner. 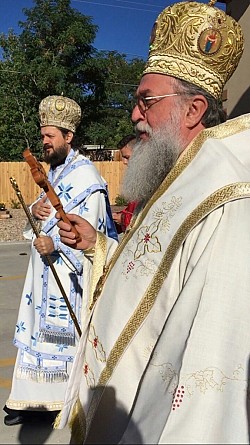 While still a mission parish that had been conducting its services in other Denver-area Orthodox churches, St. John the Baptist acquired its own property in the Denver suburb in 2009, extensively remodeling an aging, dilapidated structure on the parcel. Parishioners, and their priest, Rev. Radovan Petrovic, held their first service in the renovated building in September 2010. Pooling their modest resources and tapping their own skills in the building trades, parishioners began a significant expansion of the church in 2015 and completed it a year later, adding a cultural hall and a rectory.

The combined church and hall now serve all the spiritual, as well as fulfilling the wide-range of cultural and social needs of Colorado’s Serbian Orthodox community—including slavas, weddings, baptisms and other milestones in parish life—while the rectory provides a home for Father Radovan, Popadija Ivana, and their four children.

Generations after the first Serbs immigrated to Colorado to work in its mines and mills and on its railroads, the region’s Serbs at last have their own church, where they can reaffirm their faith as Orthodox Christians; strengthen their identity as Serbs, and enhance their community in Colorado.