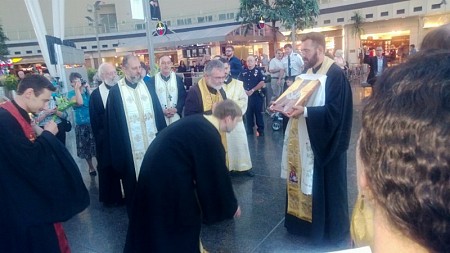 Indianapolis, IN - A certified piece of relics of Saint Nicholas the Wonderworker, Archbishop of Myra in Lycia, was solemnly welcomed at the Indianapolis International Airport by around 50 Orthodox Christians from Central Indiana on Wednesday, September 12 (25), 2013. Six priests, two deacons and faithful from most of Central Indiana's 14 Orthodox Christian churches, with a big cross, church flags and processional fans came with awe and excitement to receive a great gift and blessing from Reverend Nikolay Miletkov, parish priest of All Saints of North America Church of the Diocese of South, Orthodox Church in America. After a loving and pious veneration of the relics, short prayer service and procession to the cars at the exit of the airport, the gathered group drove to Saint Nicholas Serbian Orthodox Church in Indianapolis, Indiana, where the relics would permanently stay. Joined by at least 50 other faithful in the beautifully adorned church with numberless flowers, they continued with Akathist service to the Pillar of Orthodoxy. In a wonderful, heavenly ambient, people of all colors, heritages and customs prostrated themselves with love, joy and thanksgiving before the Rule of Faith, Image of Humility and Protector of the Poor, Inflicted and Travelers.

On the following Sunday, the 14th after Pentecost, His Grace Bishop Longin presided the Divine Liturgy in honor of coming of the holy relics, which renewed everything and everybody around them by the power of Christ, who makes everything new, and for Whom and by Whom Saint Nicholas lived. After an inspiring sermon in Serbian, English and Russian languages on the Gospel reading, the Shepherd of the New Gračanica-Midwestern American Diocese, used the opportunity to commend the commitment, love and joy in serving the Lord and His Holy Church - His People of the parish priest Dragan Petrović, who completed on this occasion 15 years of priestly ministry. At the banquet that followed, the dishes from eight different ethnic cuisines at one table of honor, where people were constantly coming to greet their beloved Vladika, witnessed of the diversity and unity of the community established a century ago by a group of immigrants from Prizren, Old Serbia, who mostly celebrated Saint Nicholas as their family patron - Slava. They probably could have only dreamed about such a triumphant day when the power of God was tangibly revealed through the glorified body of His chosen one, and in the peace, joy and love among all those gathered that day around the holy Orthodox Christian faith and their Patron Saint and united as One Body of Christ Jesus. Glory to God for all things!