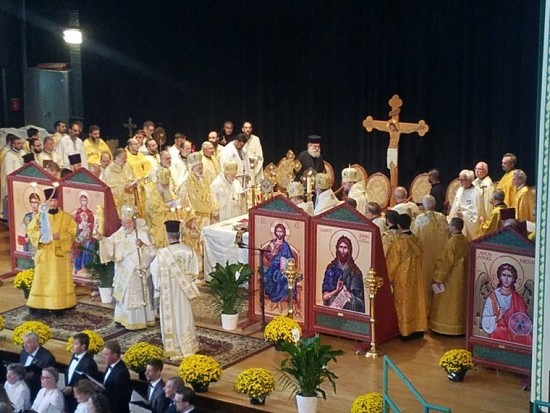 A procession of more than 100 bishops, clergy, and youth in traditional, national costume commenced the worship service. Choral responses were sung in English by the Pan Orthodox Choir of Greater Chicago, and included music traditions of participating Orthodox jurisdictions.

Recently assigned to the United States, following 10 years in the Diocese of Australia and New Zealand, Bishop Irinej sits on the Central Committee of the World Council of Churches, is a member of Columbia University’s Advisory Council for Serbian Studies, and is on the editorial board of the Tesla Memorial Society. While residing in Chicago as director of Christian Education for the Serbian Orthodox Church in the 1990s, he was also lecturer at Loyola University.

History reveals that the Orthodox Christian presence in Chicago began in the late 1800’s with an organization called the “Greco Slavonic Brotherhood”, comprised of immigrants primarily from Greece, Serbia, and Carpatho Russians (Galicians) from the then-Austro-Hungarian Empire. After petitioning the ecclesiastical centers in their respective homelands, in 1892, all three mother churches responded by sending a priest to serve the faithful.

This was the beginning of Annunciation Greek, Holy Resurrection Serbian and St. Vladimir Russian (later renamed Holy Trinity) Orthodox parishes. Today there are nearly 80 Orthodox churches in greater Chicago. Early worship began in warehouses, meeting halls, and house-chapels throughout Chicago’s Near North side.

A celebration banquet, beginning with a procession of bishops at 2:15 pm, took place at Chicago’s Marriott O’Hare, 8535 West Higgins Road. The banquet featured a historic slide presentation by the Hellenic Museum of Chicago and concluded with a choral presentation by the Pan Orthodox Choir. A commemorative booklet with a historic overview of Chicago’s Orthodox Christian presence since 1892 is also being published.