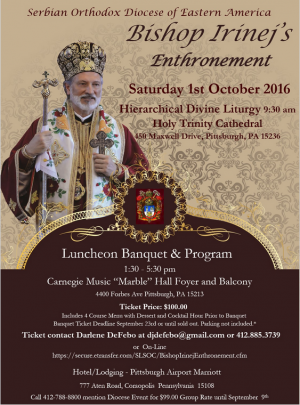 The faithful of the Serbian Orthodox Diocese of Eastern America are busily preparing to welcome their new Archpastor, His Grace Bishop Irinej (Dobrijevic). His Grace, who was elected in May by the Holy Assembly of Bishops of the Serbian Orthodox Church to head the Eastern American Diocese, will be enthroned at Holy Trinity Cathedral in Pittsburgh on Saturday, October 1.

The Hierarchical Divine Liturgy will begin at 9:30 AM, with the welcoming of the hierarchs by the clergy and faithful. It is anticipated that numerous hierarchs and other guests will be in attendance. Leading the list of dignitaries will be Their Royal Highnesses Crown Prince Alexander and Crown Princess Katherine of Serbia, who made adjustments to their busy schedule to be present.

At the conclusion of the Liturgy His Grace Bishop Irinej will be led to the cathedra, or throne of the Bishops of the Eastern American Diocese by His Grace Bishop Longin of New Gracanica-Midwest America as the senior Serbian Orthodox hierarch in North America. There Bishop Irinej will take his place as the fifth Serbian Orthodox Bishop of Eastern America, and deliver his first archpastoral message to his new flock. Following the services all will be welcomed for a short reception at the Cathedral.

The celebration will then continue at the elegant marble Carnegie Art Museum Music Hall Foyer and Balcony in the Oakland cultural center of Pittsburgh, with a banquet and program honoring our new Bishop beginning at 1:30 PM. A highlight of the banquet will be special performances by two outstanding artists. The well-known “Talija” Folklore Ensemble, visiting from Serbia on a tour of the United States, will present a program of Serbian music and dance. “Talija” specifically requested to perform at His Grace's enthronement celebration. Joining them on the program will be operatic baritone Dimitrie Lazich. Mr. Lazich has performed important roles in numerous operatic productions and has agreed to lend his considerable talents to the day's celebration.

This will be a homecoming for Bishop Irinej, who was born and raised in Cleveland, Ohio. Born Mirko Dobrijevic in 1955 to his late parents Djuro and Milica (nee Svilar), he completed his elementary and secondary education in Cleveland. After studying at the Cleveland Institute of Art from 1973-1975, he attended St Tikhon’s Orthodox Theological Seminary in South Canaan, Pennsylvania from 1975-1979, where he graduated with a Licentiate in Theology with the academic distinction maxima cum laude. In 1980 he enrolled in St Vladimir’s Orthodox Theological Seminary in Crestwood, New York and graduated in 1982 with a Master of Divinity degree with Honorable Mention for his master’s thesis Bishop Nicholai Velimirovich: A 1921 Mission to America. He then continued his studies at the Athens Center in 2000 and 2003, receiving levels I and II certificates in contemporary Greek language.

His Eminence Metropolitan Christopher of Midwestern America of blessed memory ordained him to the Holy Diaconate on 15 January 1994 at the Holy Resurrection Serbian Orthodox Cathedral in Chicago. He was tonsured a monk on 18 January 1995 at the St Sava Monastery in Libertyville, Illinois, receiving the monastic name Irinej after St Irenaeus, Bishop of Lyons. Soon after, on St. Sava's Day, 27 January 1995 he was ordained hieromonk at the St Sava Cathedral in Parma, Ohio. He was elevated to the dignity of Archimandrite on 18 June 2006 by His Grace Bishop Justin of Timok (presently of Zhicha) at the request of Patriarch Pavle of blessed memory.

Among his many appointments, Bishop Irinej represents the Serbian Orthodox Church on the World Council of Churches (WCC) Central Committee; is a member of the Jasenovac Committee and the Permanent Missions Board of the Holy Synod of Bishops; the Advisory Council of the Njegos Endowment for Serbian Studies at Columbia University; the Editorial Board of the Tesla Memorial Society; the Communications Committee of the Board of Directors of St Vladimir’s Seminary; a member of the Serbian-American Center in Belgrade; and an honorary Board Member for ZOE for Life! He is the Episcopal Patron for the Milosh Obilich Society of Serbian Chivalry and the Center for the Study of Orthodox Monarchism, both in Belgrade, Serbia. Until his move to the United States he also served as Protector and Spiritual Advisor of Australia and New Zealand for the Order of the Eagle of Georgia and the Seamless Tunic of Our Lord Jesus Christ and Chairman of the National Heads of Churches of Australia.

Previously, Bishop Irinej served at various times as Editor-in-Charge of the Information Service of the Serbian Orthodox Church; Executive Director of the Office of External Affairs of the Serbian Orthodox Church in the USA and Canada, located in Washington, DC; co-chaired the Orthodox Advisory Committee of the National Council of the Churches of Christ in Metropolitan Washington; was a member of National Council of the Churches of Christ Environmental Justice Task Force (NCCC Eco-Justice); and served on the Board of Directors of International Orthodox Christian Charities (IOCC); the Executive Council of The United States Conference of Religions for Peace (USCRP), the Conference of European Churches (CEC-KEK), the Serbian Unity Congress, the Mayor's Advisory Council on Immigrant and Refugee Affairs in Chicago, and the Chicago Human Rights Commission.

The clergy and faithful of the Serbian Orthodox Diocese of Eastern America look forward to welcoming their new Archpastor as he follows in the footsteps of his predecessors on the diocesan throne: His Grace Bishop Stefan (Lastavica), His Grace Bishop Sava (Vukovic), His Eminence Metropolitan Christopher, all of blessed memory, and His Grace Bishop Dr. Mitrophan, who is to shortly take up his new duties as Bishop of Canada. May God grant Bishop Irinej many years, rightly defining the word God's truth and wisely governing the God-protected Diocese of Eastern America. Eis polla eti, Despota!

9:30 AM - Greeting of Hierarchs and Hierarchical Divine Liturgy

Banquet Reservations: $100 per person. Mail check payable to “Serbian Orthodox Diocese”, together with your name and address and the names of those for whom reservations are being ordered to:

Make your reservation by credit card or bank draft online by visiting the website: https://secure.etransfer.com/SLSOC/BishopIrinejEnthronement.cfm

Reservations MUST be ordered no later than September 23. Place cards will be distributed at the door. No tickets will be sold at the door.