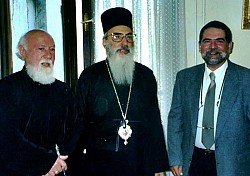 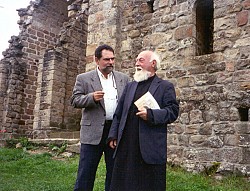 IN MEMORIAM:
WE ENTER INTO THEIR LABORS AND THEIR WORK WE CONTINUE

We are all obliged in the Church to always remember in our prayers our teachers, co-workers, neighbors and predecessors. The Apostle Paul, addressing the Hebrews, writes: “Remember your leaders, who spoke the word of God to you. Consider the outcome of their way of life and imitate their faith,” (13:7). Therefor, this brief biography I write out of my gratitude to Fr. Mateja Matejic: a priest, writer, anthologist, professor, father and friend.

I met Prota Mateja in Chicago in 2004. Though he was already over 80 years of age and in retirement for some time, he was spiritually resilient, very active, lucid and joyful in spirit. I remember a lecture he gave in the hall of the Chicago Cathedral. The theme was: “Four Principles of Biblical Giving”. Following the lecture, as we took a walk, he stopped and with a solemn tone said: “You know, child, I think I missed the point of tonight's talk but I gave everyone a clear message.” After retiring he wrote tirelessly and from time to time delivered lectures at the University and, upon invitation, at the many Serbian churches throughout America and Canda.

It is an exceptional honor to write about such a significant and unforgetable priest of the Serbian Orthodox Church in America. Prota Mateja was a writer, translator, poet, university professor of Slavic languages and literature and, in the first place – which he always stressed – he was a Serbian Orthodox priest.

Mateja Matejic was born February 19, 1924 in Smederevo in a patriarchial home. After WWII, in 1945, at the age of 25 he emigrated to the United States of America. He completed his studies at the University of Michigan. He defended his doctoral thesis at the same university a few years later.

Prota Mateja moved to Columbus, Ohio upon the invitation of the Bishop of Eastern America Dr. Sava Vukovic, in 1967, when the church community (parish) was founded there. For nearly a year, every weekend Prota would drive over 200 kilometers with his family from Cleveland in order to serve the Divine Liturgy and spend time with the people. Soon, the church board decided to purchase property and a house which was converted into a place of prayer, a chapel. In 1968 Fr. Mateja moved to Columbus when he was chosen as professor at Ohio State University.

With his parishioners he built a beautiful church, dedicated to St. Stephan of Dechani. The church was completed in a year. It was consecrated by Bishop Sava of Eastern America on September 8, 1973. Besides the new home, Prota Mateja and his parishioners purchased two homes next to the chuch property. In the commemorative book of this parish, on the occasion of the 25th anniversary of the church, among other things, it is written: “More important than the physical and material, the goal is the spiritual progress of the community in Orthodoxy. Church attendance is excellent not only Sundays but other feast days. The number of people who took communion is unusually great.” Since the founding of the parish in 1967 Prota Mateja remained as the parish priest. He retired in 1991.

From 1968 he lectured at Ohio State University where in 1970 he founded and led the scientific projet known as the “Hilandar Room”. He was the first director of the Hilandar Research Project for Medieval Slavic Studies. For many years he was editor of the “Kosovo” publishing company as well as the official publication of the Serbian Orthodox Church in America and Canada “The Path of Orthodoxy”. In 2001 he received both a Commendation and the highest award of the Serbian Orthodox Church, the Order of St. Sava and a Gramata from His Holiness Patriarch Pavle of Serbia.

The greatest achievement of Fr. Mateja Matejic is establishing the Hilandar Room at Ohio State University in Columbus, Ohio. With the blessing of Bishop Dr. Sava (Vukovic) of Eastern America and with the help of his colleagues at the University, a number of American scientific institutions and the president of the Serbian National Federation Bozidar Stojanovic (Bob Stone), the “Hilandar Room” was open in 1970. Later, the project received a new name “The Hilandar Research Library and the Resource Center for Medieval Slavic Studies”. Together with his son, Dr. Predrag Matejic, Prota Mateja goes to Hilandar in 1970 and for the next five years they record and microfilm all the manuscripts in the Hilandar monastery, as well as three other Athonite monasteries. Today, the “The Hilandar Research Library” in Columbus is the largest collection of Slavic manuscripts on microfilm in the world. Besides this, “The Hilandar Research Library” contains hundreds of slides of icons, frescoes, buildings, ecclesiastical items and other objects. Over three hundred researchers worldwide have gone through the Hilandar Research Library Ohio during three decades of its existence. After the fire in Hilandar everyone realized the value of the work of the group of researchers from Ohio State University, led by Fr. Mateja Matejic.