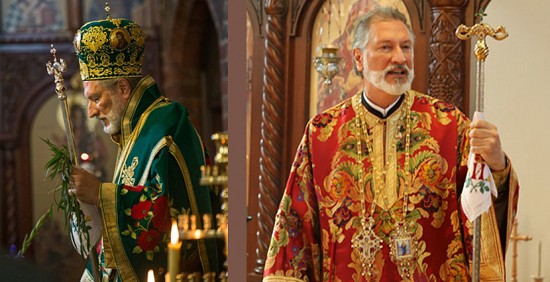 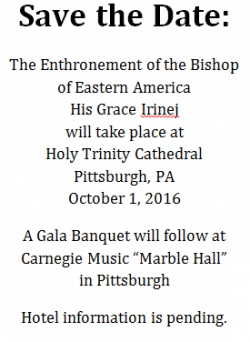 Bishop Irinej was born Mirko Dobrijevic in 1955 in Cleveland, Ohio, USA, to his father Djuro and mother Milica (nee Svilar). His elementary and secondary education was completed in Cleveland, Ohio. After studying at the Cleveland Institute of Art from 1973-1975, he attended St Tikhon's Orthodox Theological Seminary in South Canaan, Pennsylvania from 1975-1979, where he graduated with a Licentiate in Theology with the academic distinction maxima cum laude. In 1980 he enrolled in St Vladimir's Orthodox Theological Seminary in Crestwood, New York and graduated in 1982 with a Master of Divinity degree with Honourable Mention for his master's thesis Bishop Nicholai Velimirovich: A 1921 Mission to America. Following which, he entertained studies at the Athens Centre in 2000 and 2003 receiving levels I and II certificates in contemporary Greek language.

His Eminence Metropolitan Christopher of Midwestern America ordained him deacon on 15 January 1994 at the Holy Resurrection Serbian Orthodox Cathedral in Chicago, Illinois. He was tonsured a monk on 18 January 1995 at the St Sava Monastery in Libertyville, Illinois, receiving the monastic name Irinej after St Irenaeus, Bishop of Lyons. Thereafter, he was ordained hieromonk on 27 January 1995 at the St Sava Cathedral in Parma, Ohio, USA. He was elevated to the dignity of Archimandrite on 18 June 2006 by His Grace Bishop Justin of Timok (presently of Zhicha), a member of the Holy Synod of Bishops, at the request of Patriarch Pavle.

Among his many appointments, Bishop Irinej represents the Serbian Orthodox Church to the World Council of Churches (WCC) Central Committee; is a member of the Jasenovac Committee and the Permanent Missions Board of the Holy Synod of Bishops; the Advisory Council of the Njegos Endowment for Serbian Studies at Columbia University; and the Editorial Board of the Tesla Memorial Society; and the Communications Committee of the Board of Directors of St Vladimir's Seminary; a member of the Serbian-American Center in Belgrade; and an honourary Board Member for ZOE for Life! He is the Episcopal Patron for the Milosh Obilich Society of Serbian Chivalry and the Centre for the Study of Orthodox Monarchism, both in Belgrade, Serbia; Protector and Spiritual Advisor of Australia and New Zealand for the Order of the Eagle of Georgia and the Seamless Tunic of Our Lord Jesus Christ and Chairman of the National Heads of Churches of Australia.

Previously, Bishop Irinej was the Editor-in-Charge of the Information Service of the Serbian Orthodox Church; Executive Director of the Office of External Affairs of the Serbian Orthodox Church in the USA and Canada, located in Washington, DC; co-chaired the Orthodox Advisory Committee of the National Council of the Churches of Christ in Metropolitan Washington; was a member of National Council of the Churches of Christ Environmental Justice Task Force (NCCC Eco-Justice); and served on the Board of Directors of International Orthodox Christian Charities (IOCC); the Executive Council of The United States Conference of Religions for Peace (USCRP), the Conference of European Churches (CEC-KEK), the Serbian Unity Congress, the Mayor's Advisory Council on Immigrant and Refugee Affairs in Chicago, and the Chicago Human Rights Commission.

On the basis of the decision of the Holy Assembly of Bishops of 26 May 2006, the Reverend Hieromonk Irinej (Dobrijevic), Consultant to the Holy Synod of Bishops, was elected as Bishop of the Diocese of Australia and New Zealand. He was consecrated on 15 July 2006 in the Holy Archangel Michael Cathedral in Belgrade at the hands of His Eminence Dr Amfilohije, Archbishop of Cetinje, Metropolitan of Montenegro and the Littoral, together with 16 other bishops. The Consecration of Bishop Irinej witnessed to date the single largest gathering of Belgrade's Diplomatic Corps. He was enthroned on 21 October 2006 in the St Sava Pro-Cathedral in Elanora Heights, New South Wales as Bishop of the Serbian Orthodox Diocese of Australia and New Zealand, with its see in Sydney by His Grace Chrysostom, Bishop of Bihac-Petrovac (presently of Zvornik-Tuzla) a member of the Holy Synod of Bishops. The following day, 22 October 2006, His Grace was presented as the Bishop-Administrator for the Diocese for Australia and New Zealand New Gracanica Metropolitanate at the St Sava Monastery in Wallaroo, New South Wales. 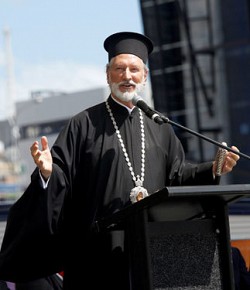 Having taken into consideration his significant diplomatic accomplishments, amongst all else, it was determined by the members of the Holy Assembly of Bishops that he be entrusted with the eminent Diocese of Eastern America with its See in New York City. The rebuilding of the St Sava Pro-Cathedral in Manhattan, recently destroyed in fire, will be the most formidable historic task awaiting the new Bishop as he assumes the Throne of the Bishops of Eastern America.