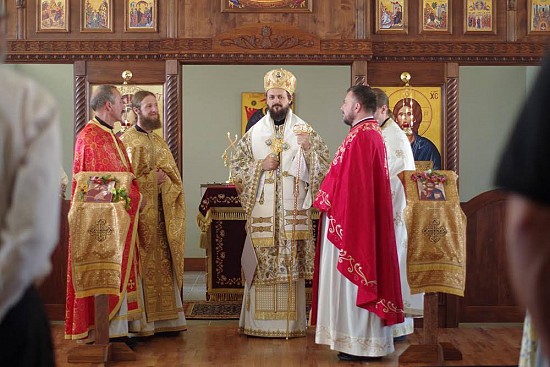 Kalispell, MT - On a quiet, leafy street in Kalispell's west side, a truly historic event unfolded on Saturday evening, the 18th of July. The faithful of the newly-founded St. Herman Orthodox Christian Church, along with their friends and family, greeted their beloved Arch-pastor, Bishop Maxim, of the Serbian Orthodox Diocese of Western America for the very first time.

The parish of St. Herman was officially elevated to active mission status last June and is Montana's newest Orthodox Christian parish. The occasion of His Grace's arrival was especially marked by his gifting to the parish of a relic of St. Peter of Korisha, one of Kosovo's greatest ascetic saints and a Father of Serbian Monasticism. The gift and the presence of St. Peter's Holy relics among the faithful demonstrated the powerful link between the ancient and venerable Faith of the Serbian people with the evangelical growth of Orthodox Christianity in America.

Great Vespers was presided over by His Grace and served by honored guest, Fr. Timothy Pavlatos, accompanied by the beautiful chanting of St. Herman's choir and faithful. In a formal presentation of the relics to the parish, His Grace described the life of St. Peter to those present and commented on the reality of the Church as a living organism in which both time and space are united and mingled together, as we participate in the mystery of Christ through the ages.

Following the veneration of the relics, local craft beer and a light meal was enjoyed by all, as Bishop and flock of St. Herman's met and mingled for the first time, face to face. On Sunday morning, His Grace was met at the entrance to the temple by visiting clergy, Fr. Predrag, Dean of the Butte Deanery, Fr. Timothy Pavlatos of St. John the Forerunner in Beaverton, OR, Fr. Theophan Mackey from Los Alamos, NM, and Fr. Russell of Holy Trinity in Butte. Also assembled to meet His Grace were Deacon Daniel Kirk, and Subdeacon Darko of St. Sava in Issaquah along with parishioners.

The Hierarchical Liturgy was preceded by the blessing of the new temple by Bishop Maxim and visiting priests. After the Great Entrance, Deacon Daniel Kirk was brought forward and ordained by His Grace to the Holy Priesthood to become St. Herman's first parish priest. At the banquet which followed the Divine Liturgy, His Grace invited the clergy to speak to the parish, Fr. Daniel and his family about the new life which they face as a fledgling Orthodox Christian Church in the diocese. The festive meal was concluded by the stunning chants of ancient Kosovo, sung by His Grace and Fr. Predrag, followed by some of America's own best folk songs performed by St. Herman's talented parishioners.