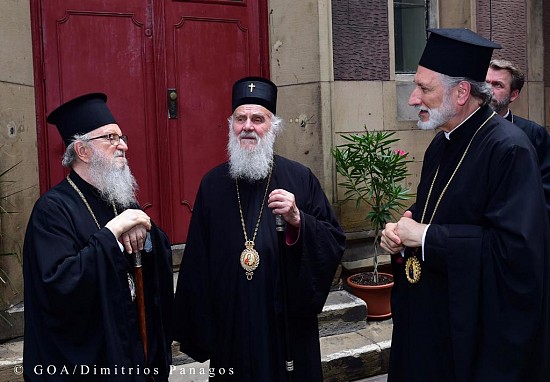 His Holiness Serbian Patriarch Irinej arrived in the US on July 14, 2017 in order to take part in the pan Orthodox glorification of the newly revaled St. Mardarije of Libertyville and All-America, the first Serbian Bishop of America and Canada.

His Holiness Patriarch Irinej, accompanied by Protodeacon Damjan Bozic, arrived in the afternoon at JFK on a direct Air Serbia flight from Belgrade.

The same day, the Serbian Patriarch visited the fire ravaged St. Sava Cathedral in New York which burned down on Pascha 2016. His Holiness was accompanied by His Grace Bishop Irinej of Eastern America and His Eminence Archbishop Demetrios, the first hierarch of the Greek Orthodox Archdiocese in America and the chairman of the Assembly of Canonical Orthodox Bishops of America.

During the visit Bishop Irinej informed His Holiness of the plans regarding the renovation of the St. Sava Cathedral in New York City. The Patriarch greeted the parish clergy, representatives from the parish and Serbian community in New York.