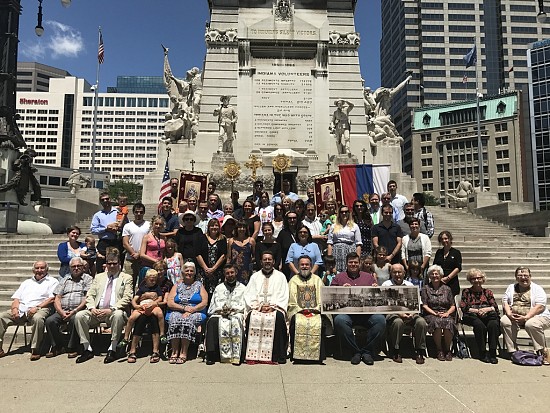 WE WILL NOT FORGET THEM!

Not because they went to war, but because ...

Exactly 100 years ago this year when Serbia was occupied and the Serbian army together with the king fled to Greece to regain strength, Serbs from all over the world were called to join forces and go back to retrieve the country and its people from the occupiers. 150 young men from our community of Indianapolis answered that call. One of them Mr. Savich, when he arrived there and was a translator to the American allies, was given a chance to be dismissed from the Serbian army and work as a translator for the Americans – he politely refused - joining his Serbian comrades.

Out of those 150, only five or six came back. Unfortunately the only ones we know of and have learned a little from, are the descendants of those who tied  themselves to the church, and therefore continued existing, knowing to this day who they are and where they came from.

The reason we are celebrating these World War I volunteers is not because they went to war, it is because they showed Ultimate Love, the love Jesus Christ taught us about and we have kept in the Orthodox Christian church to this day. Sacrifice (for the other) is Love.

All of them lived a very comfortable life in the promised land, America, but because they were needed to help regain freedom to the people in the country they came from, they went back knowing they would offer the most they are able – their life. May their memory be eternal, may God establish their souls were the Saints repose and give their descendants blessed lives and eternal Kingdom.