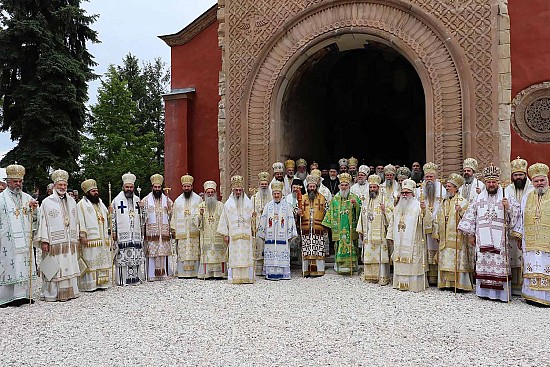 A PRAYERFUL BEGINING OF THE HOLY ASSEMBLY OF BISHOPS

The Holy Assembly of Bishops of the Serbian Orthodox Church began solemnly on May 9, 2019 with the Holy Hierarchical Divine Liturgy and the Rite of the Invocation of the Holy officiated by His Holiness Serbian Patriarch Irinej in the Church of the Holy Ascension in Zicha Monastery (photo gallery)

This year’s Holy Assembly of Bishops of the Serbian Orthodox Church began in Zicha Monastery with the Divine Liturgy officiated by His Holiness Serbian Patriarch Irinej with the concelebration of Their Eminences Archbishop of Ohrid and Metropolitans of Skoplje Jovan, Metropolitan Porfirije of Zagreb and Ljubljana and Hrizostom of Dabro-Bosna, Their Graces Bishops Justin of Zicha, Vasilije of Srem, Nikanor of Banat, Longin of New Gracanica and Midwestern America, Mitrophan of Canada, Dositej of Britain and Scandinavia, Pahomije of Vranje, Jovan of Sumadija, Atanasije of Milesevo, Joanikije of Budimlje and Niksic, Grigorije of Düsseldorf and Germany, Teodosije of Ras and Prizren, Maxim of Western America, Irinej of Eastern America, David of Krusevac, Jovan of Slavonia, Andrej of Austria and Switzerland, Siluan of Australia and New Zealand, Kirilo of Buenos Aires and South and Central America, Nikodim of Dalmatia, Heruvim of Osek-Polje and Baranja, Dimitrije of Zahum and Hercegovina, Antonije Vicar of Moravica, Isihije Vicar of Mohac and Georgije retired Bishop of Canada.

Concelebrating were also Archimandrite and Abbot of Studenica Dr. Tihon (Rakicevic), Protopresbyters-Stavrophor Savo Jovic and Ljubinko Kostic, Rev. Filip Milunovic, as well as Protodeacon Ivan Gasic and Aleksandar Grujovic. A number of hierarchs of the Holy Serbian Orthodox Church were in attendance.

A special occasion for this gathering of the Patriarch, hierarchs, clergy, monastics and faithful at Zicha was the celebration of the 800th anniversary of the autocephaly of the Serbian Orthodox Church. Already in the early morning hours the gates of the monastery had been opened as they welcomed guests who arrived from all ends of the world. The clergy and monastics of the Diocese of Zicha, with the blessing of His Grace Bishop Justin of Zicha, led by Archimandrite Damjan (Cvetkovic)  and Archimandrite Savo (Ilic), warmly welcomed the guests before the beginning of the liturgical celebration of this significant anniversary.

As was the custom from Apostolic times that unity be manifest through conciliarity, our Holy Church today at this holy site of Zicha Monastery reminded us of the medieval assemblies which took place here, that served as preparation and confirmation of the autocephaly received. Faithful assembled from all ends of the world that with their pastors and spiritual fathers they might celebrate that which we received as a gift from God and Saint Sava 800 years ago. The chanting of the monastery sisterhood made the service much more beautiful, as St. Bishop Nikolaj of Zicha says in his Heavenly Liturgy: “the cherubims chant the cherubic hymn”. Among the faithful was the General Secretary of the President of the Republic of Serbia Nikola Selanovic, the Mayor of Kraljevo Predrag Terzic, as well as representatives from the political and cultural world. In order for the event to presented to a wider audience and immortalized for history, there were another of television crews, among whom was the hard-working team from the church’s own TV Hram.

In his address to those present, His Grace Bishop Justin of Zicha said, among other things:

“Here we are in Holy Zicha to receive the blessings of our ancestors for the beginning of the work of the Holy Assembly of Bishops. It is a great blessing that we have to whom and for what to pray for. May the Lord grant that we approach that which lies before us with a clean heart. A great, main celebration of the 800th anniversary of the autocephaly of the Serbian Orthodox Church awaits us in October.
May the Lord, with the Most Holy Theotokos and all His Saints, lead in all these things to the Heavenly Kingdom. Amen”

A large number of faithful approached Holy Communion after which was the prayer of the Invocation of the Holy Spirit for the beginning of the Assembly – Sabor. In his message to all those in attendance His Holiness Serbian Patriarch Irinej said:

“We are in this holy church to continue that which Saint Sava began here with our people. He preached the Gospel and advised the hierarchs to lead the Church of God which has already been moving forward among the other autocephalous Churches for 800 years. Zicha is, according to the words of Saint Bishop Nikolaj, “an old Serbian tale”. In it we have gathered to see what all we have achieved this previous year, to consider the current problems and with God’s help to find a path and solution. Our people should know that we are all living temples of God, that the Lord is the father of all of us, and we are brothers in the Spirit. All of us who are baptized in the name of the Lord, who suffered and resurrected for us, make up the Church together. He fulfills the words given to the Apostles: that He will be with us until the end of the world. He never renounces us, for He has promised that not even the gates of Hades shall prevail over the Church.”

“We should bear in mind that we are members of the Body of Christ. We should witness that with our lives. We have examples to follow. There is a great number of Saints of God from  among our people. We are called to walk in their footsteps. This is the only path that leads to Life, other paths lead only to death. Here we open our Assembly, where our unity is manifested. The voice of God – the voice of the Church, is heard at the Assembly. All decision need to be conciliar. May the Lord help us in these confused times in which we live, that we find the right path, the path of Christ. One of the greatest flaws of our people is disunity. As a small nation in size, we can only survive in unity and harmony, as Bishop Nikolaj used to say: that the Lord unifies us, sanctifies us and multiplies us. May the blessing of this holy site in which we find ourselves be with all of you unto the ages. Amen”, said His Holiness Serbian Patriarch Irinej.

In the entrance area of Zicha Monastery is where the work of the Holy Assembly of Bishops of the Serbian Orthodox Church began. Following breakfast, served in the monastery trpeza, the hierarchs began their meeting in the monastery konak, which is a testimony of the persecuted history of our people during the 20th century.