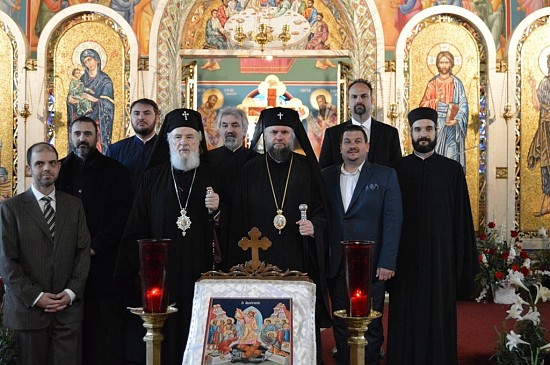 The guests from the brotherly Romanian church were welcomed on behalf of the Cathedral community by Protonamesnik Fr. Radovan Jakovljevic, Fr. Vasilije Vranic, Ph.D, Milan Savich, Cathedral Executive Board President, and Nenad Djordjevic and Marko Bojovic of Saint Sava Academy, together with the students and teachers of the dual-language school.

His Grace Bishop Longin of New Gracanica and Midwestern America concelebrated in the Enthronement of Metropolitan Nicolae on Sunday, April 30th, at Saint Constantine and Helen Cathedral in Chicago, and is scheduled to receive the high-level delegation later today at the Diocesan See.