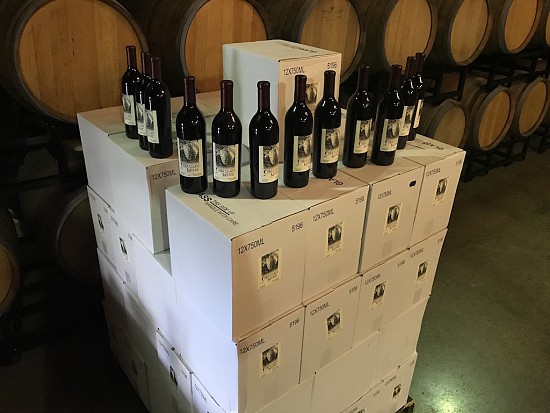 The clergy of the Western American Diocese of the Serbian Orthodox Church in North and South America were recently invited by their spiritual father, His Grace Bishop Maxim, to take part in a project not typically given to clergy: to attend a wine tasting session, the results of which would produce liturgical wine to be used throughout this diocese and beyond.

In November of 2017 the bishop, together with a number of clergy, made the journey from the diocesan see in Los Angeles to the breathtaking 200+ acres of vineyards in Paso Robles, California known as Opolo Vineyards. Nestled approximately midway between Los Angeles and San Francisco, Paso Robles is known for its wineries and olive groves. This excursion would, in turn, result to another, most festive and invigorating visit to Opolo Vineyards on April 19, 2018, when Rick Quinn, vineyard owner and member of the St. Steven's Cathedral in Alhambra, presented to the bishop and all the clergy the final product: Sebastian Liturgical Wine.

Granted, this is not the beginning of Sebastian Wine. It was, in fact, at the annual Diocesan Days celebration in September 2005, during his first visit to the historic St. Sava Church in Jackson, California that His Grace Bishop Maxim tasted some of the renowned Amador County wines and made the suggestion that the diocese produce its own wine for liturgical use. Fr. Stephen Tumbas, then parish priest in Jackson, offered his God-given talents in making this dream a reality. He explained, “Not knowing exactly what would be involved, I agreed to take on the project. The first batch of wine was produced in 2006 from aromatic Black Muscat and Zinfandel grapes that were harvested late to obtain higher sugar content.“ The following year Sebastian Liturgical Wine was released during the Diocesan Days celebration. The wine is aptly named in honored of Father Sebastian Dabovich, missionary, founding priest of St. Sava Church in Jackson and of several other parishes in western America. At the May 2015 regular session of the Holy Assembly of Bishops of the Serbian Orthodox Church he was glorified a saint and is commemorated on November 30. Over the course of the years that Fr. Stephen was involved in making Sebastian Wine it was used in nearly every Serbian Orthodox Church in the Western Diocese for Holy Communion. It has also been sold to a number of churches in the Antiochian, Greek and OCA jurisdictions. It is believed that this was the first time in the history of the Serbian Orthodox Church in America that it was producing its own Altar wine.

Subsequently, the recent visit to Opolo Vineyards marked a beginning to a new chapter in the history of Sebastian Wine. In attendance were clergy and laity from Los Angeles, San Marcos, San Francisco, Saratoga, Moraga, Jackson, Alaska, Las Vegas, Phoenix and Galveston, Texas. Tours of the vineyard and wine tasting was offered to all in attendance by the gracious host, after which a hearty lunch was served.

Following the luncheon His Grace, the bishop, offered his gratitude to Rick Quinn and his team of oenologists for their labour of love. As a small token of his appreciation, the bishop offered Rick an ornate icon of St. Seraphim of Sarov as a prayerful keepsake. The bishop noted that just as St. Seraphim was inspired to greet everyone throughout the year with the Paschal greeting “Christ is risen, my joy!“, may that same joy be with Rick, his family and his extended family at Opolo Vineyards.

To the delight of everyone in attendance the much-talented cellist, Popadija Biljana Bojovic, offered a number of musical selections, both Serbian and some Irish, recognizing Rick's Irish background.

Finally, addressing His Grace and the clergy, Rick Quinn stated: “Fr. Stephen has been making wine for you for years and it was a success. With his retirement, I think his vineyard retired also. And so Vladika asked what we could do, something we could do from scratch, that would be organic. I told him we have two oenologists that worked for Opolo but it would be better if he could bring his priests and they could get exactly what they wanted. And so, a few months ago, the bishop and a number of clergy came and they actually started mixing wine and what we have in the bottle today is exactly what they agreed on and thought would be good for sacramental wine. They designed the label and Opolo produced it all. We did 91 cases as Vladika requested. The diocese covered the cost of the labels. Later, the deacon called to ask for the remaining invoice and I told him that it would be a donation from Opolo. It's a pleasure to have you all here, to be part of the Church, the body of Christ, I really appreciate it.“

While the vineyard's picture-perfect setting tempted the guests to spend the remainder of that quiet, lazy afternoon in its presence, the long drive home prompted their departure. Wine boxes were loaded into cars and sent in the various direction from whence they came. Indeed, the fruits of these vines and the labour of love of those who toil them is overflowing, and will now be poured into parishes diocese-wide and even beyond, consumed by those many who seek the One who is the source of love and all the blessings from above.

The One who is the vine.