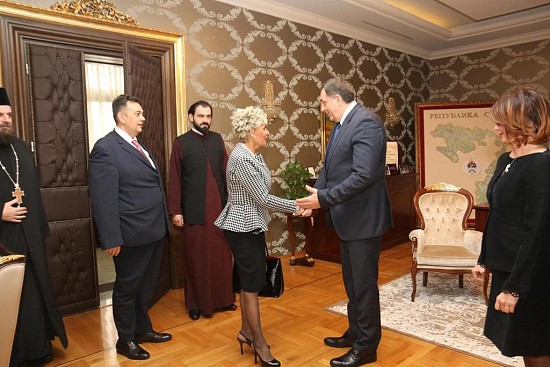 The President said that it was his great honor to be able to hand this Order to Rebecca MacDonald and thank her for all that she has done in promoting Republika Srpska and the Serbian people in Canada. Attending were His Grace Bishop Jefrem of Banja Luka, Archimandrite Stefan Saric, Protodeacon Damjan Bozic and Dejan Nakic.

Mrs. MacDonald financed the building of the Serbian Orthodox Church in Toronto, she helps the Serbian organizations and events, she also stipends young Serbs in Canada. Mrs. MacDonald, baptized as Ubavka Mitic, was born in Sarajevo. She grew up in Belgrade. After her sophmore year at the College of Medicine she moved to Toronto. Twenty years ago she founded the company JUST ENERGY is a business which deals in sales of energy products. In light of her great success she was named most successful woman in Canada for seven consecutive years. She opened the New York Stock Exchange many times, which is considered the crown of success of business people in North America.

Mrs. Rebecca is the most successful Serbian woman and one of the most influential women in the world of business and politics in North America. During the wars and expulsion of the Serbian people, Mrs. MacDonald helped the refugees. Through the Canadian government she sent financial assistance for the people affected by the floods in Obrenovac. She renovated many orphanages. A section of the University of Toronto Hospital bears her name.