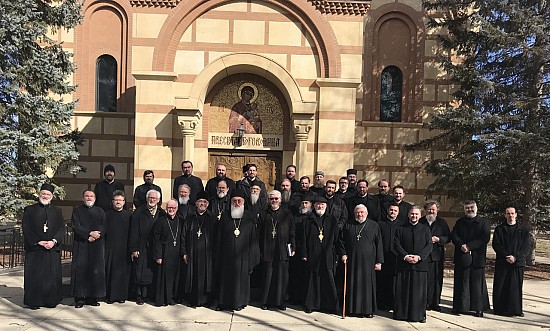 The Liturgy of Presanctified Gifts was served by the monastery clergy. The clergy in attendance sang the responses at the Divine Liturgy, together with the participation of the clergy choir led by V. Rev. Milos Vesin, professor at the St. Sava School of Theology. Breakfast was served in the monastery hall afterward.

His Grace Bishop Longin welcomed all the clergy and the guest lecturer and spoke of the significance of this gathering. V. Rev. Stavrophor Rade Obsenica led the symposium. He introduced the speaker. The theme of the talk was Stewardship in church life, entitled “Everyone who has been given much, much will be demanded” (Luke 12:48).

The speaker spoke eloquently and presented the essence of stewardship in the Church, citing the many successful attempts of church-school congregations. Essentially, it is good deeds, and faith without good deeds is not fruitful. The presentation stimulated the clergy to promote stewardship in their parishes. A discussion ensued during which the speaker answered all the questions based on many years of experience.

In his address Bishop Longin spoke of the state of the diocese which, apart from all the difficulties and problems, is stable and church life continues at a normal rate. He is satisfied with the pastoral work of the clergy and hopes that it will continue to be satisfactory in the future. He also stressed the significance of children being active in church life and hopes priests will dedicate more of their time in work with the youth. He also spoke of the need for uniformity in the administrative work of the church and parish. He noted that we must keep to the Uniform Rules and Regulation of church school congregations which was adopted at the Church Sabor. Regarding parish by-laws they must be in compliance with the Uniform Rules and Regulations and they can contain some norms of a local character.

Fr. Radomir Plavsic spoke about Saints – Martyrs who served in these areas. He noted their contribution to the development of church life and the sacrifice they offered on the altar of the church and faithful people.

At four o’clock in the afternoon an Akathist was served. Besides the clergy, parish delegates were also present. The clergy confession took place during the Akathist. Confessors were Archimandrite Thomas Kazich, the spiritual father of the monastery and Fr. Bogdan Zjalic, retired priest from Chisholm, Minnesota. Dinner was served after the Akathist.

The Annual Assembly of the Diocese of New Gracanica-Midwest America

The Assembly was opened with a prayer and a blessing from Bishop Longin at seven o’clock in the evening. His Grace chaired the assembly while the working part of the Assembly was led by V. Rev. Dr. Milos Vesin. V. Rev. Marko Matic served as secretary of the assembly.

Once the agenda was approved by the assembly His Grace submitted a detailed report of the state of the diocese and work over the past year. The report was greeted by all those in attendance after which a talk about stewardship was delivered, the same one that was delivered to the clergy at the clergy conference. Many laymen listened carefully to the talk. The minutes from last year’s Assembly were accepted as they were received. The first part of the Assembly ended here, to be continued the following day.

On Saturday, March 24, the Divine Liturgy was served. Bishop Longin officiated with the concelebration of a number of clergy and monastics. Breakfast was served after liturgy.

The Assembly continued which included the financial report submitted by Mara Milanovic. Ilija Potkonjak submitted the Audit board report. The 2018 budget was approved.

V. Rev. Dragan Petrovic submitted his report as Youth Director. This committee has been successful for a number of years now. For example, last year’s winter retreat had 150 participants at New Gracanica. A part of this report was also the oratorical festival. There were three participants who are received with thunderous applause.

Fr. Thomas Kazich submitted a report on behalf of the Christian Education Committee. Fr. Kazich is also editor of “The Observer” and “Little Falcons” which contribute greatly to education in the diocese.

A report from the Kolo Sestara was submitted by President Mira Adjelkovic, read by vice president Vickie Petric Dorsey. As always, the Sisters were active in all aspects of diocesan life.

Finally, Fr. Milos read the Assembly Resolutions in both languages.

The assembly ended with a prayer and the blessing of Bishop Longin. All was holy and honorable and acceptable to gracious God.