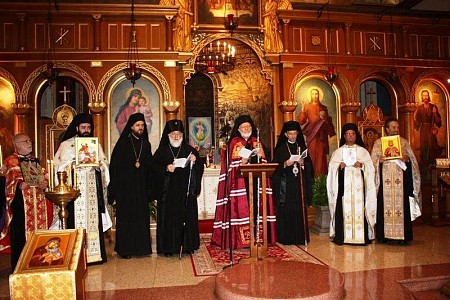 SUNDAY OF ORTHODOXY IN WESTERN DIOCESE

Alhambra, CA - Bringing to life the words of the Psalmist, “ Behold, how good and how pleasant it is for brethren to dwell together in unity” (Psalm 133: 1), the canonical Orthodox bishops of the western United States – Metropolitan Gerasimos, Archbishop Joseph, Archbishop Benjamin, and our Bishop Maxim – are admired for their concerted efforts to gather their clergy and faithful together in worship and fellowship. The latest occurrence of this was here at the Cathedral on Saturday and Sunday, March 8 and 9, 2014, for the first Sunday of Great Lent, which commemorates the return of icons to the Church in the year 843 after the heresy of iconoclasm was overcome.

On Saturday afternoon, thirty youth from Grades 5 through 12, including St. Steven's students, assembled in the North hall and were led by Fr. Bob Fox from St. John the Baptist Greek Orthodox Church in Anaheim. Fr. Bob incorporated fun activities into his presentation that helped the students recognize three important ways to strengthen their spiritual lives: regularly going to church, attentively praying every day, and seeking fellowship with their Orthodox Christian peers. The hierarchs joined the group for a portion of the event and appreciated the growing love the youth have for their faith.

Meanwhile in the South hall, the special guest and keynote speaker for the weekend, Archimandrite Dr. Nathanael Symeonidis, spoke to young adults and adults about how our modern society can influence what we consider important in life. As an example, he referred to the Young Professionals Ministry he's involved with in New York City. Over 500 young professionals who work and/or live in the city have been brought together by the Church for fellowship and philanthropic ministry. In meeting many of them, Fr. Nathanael discovered they identified more with the world than with Christ and His Church, and they didn't even realize it. Fr. Nathanael pointed out to his audience that there had to be more to life than what society deemed important or relevant, and it brought him to the reason everyone was gathered on the Cathedral campus this weekend: our invitation to be Christ's children, to become living icons, to be holy. And what was important to remember, especially for the young adults in attendance, was that holiness was more related to repentance than perfection. He encouraged young people who have stayed away or “hid” from Christ to get up when they fall and, like the prodigal son, return to the Father. To return in repentance, shifting their mind and heart back towards God, is to be like the saints depicted on icons.

Great Vespers and an icon procession took place in the Cathedral with over thirty clergy participating. His Eminence, Archbishop Joseph, spoke eloquently on the persecution currently being suffered by the Christian faithful in Syria and throughout the Middle East, and a special collection was taken on their behalf. Adding to the tragedy is the under-reporting of it by many of the world media outlets, and His Eminence appealed to those in the church to talk about the suffering of Middle Eastern Christians with people they know; he also compared these events to what the Serbian people have endured over the last two decades. Archbishop Joseph reminded everyone that the whereabouts of the Hierarchs John and Paul of Aleppo, as well as thirteen nuns, were still unknown after several months. The evening concluded with refreshments and fellowship in the Social hall.

Sunday morning began with Matins and then the clergy led the Hierarchs into the church for the Divine Liturgy. Archimandrite Dr. Nathanael Symeonidis offered the homily, reflecting on the morning's reading from St. John's Gospel (1: 43-51), where the Apostle Nathanael asked his colleague Phillip if anything good could come from Nazareth; because the reference was to Jesus, Phillip replied, “Come and see.” Fr. Nathanael encouraged the congregation to use the Sunday of Orthodoxy as a special opportunity to “come and see” what our Faith entails. After the Altar servers and children led the clergy in the icon procession, His Eminence, Metropolitan Gerasimos led everyone in reciting the Synodikon, which concluded: “…This is the Faith of the Orthodox! This is the Faith which has established the universe!” The Metropolitan then thanked his brother, Bishop Maxim, for hosting the weekend festivities and the Cathedral Dean, Fr. Nicholas Ceko, welcomed everyone and invited all to the fellowship luncheon. The luncheon offered one final opportunity for the Southern California Orthodox Christians gathered together here to share in joy when Fr. Nicholas announced that it was just learned that the thirteen nuns held in captivity in the Middle East had been released in Lebanon. With this dramatic news, the inspiring weekend drew to a close.