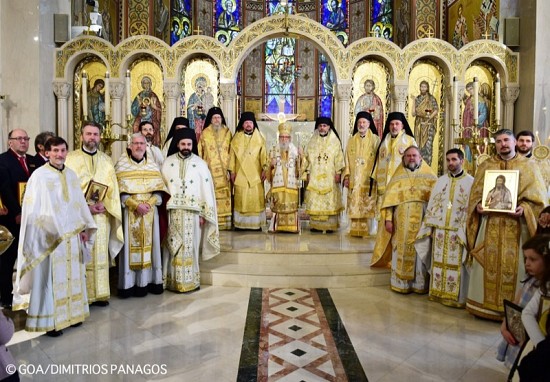 (New York, March 5th 2017) His Eminence, Geron Archbishop Demetrios (Greek Orthodox Archdiocese of America-Ecumenical Patriarchate), Chairman of the Assembly of Canonical Orthodox Bishops of the United States of America invited hierarchs of the Assemblyto concelebrate at the Hierarchical Divine Liturgy on the Feast of the Triumph of Orthodoxy at the Greek Orthodox Archdiocesan Cathedral of the Holy Trinity in Manhattan.

His Eminence Archbishop Demetrios toward the conclusion of the Divine Liturgy spoke eloquently about the significance of essential Eucharistic unity, communing together as the One Body of Christ, manifest through this concelebration of hierarchs and representatives from our canonical Orthodox jurisdictions in the United States of America. His words were echoed by His Grace Bishop John, Second Vice Chairman of the Assembly, along with gratitude to Archbishop Demetrios for gathering the plentitude of Orthodoxy from the various traditions as one around the Lord’s Table.

Immediately prior to the dismissal, during the chanting of the Troparion of the Sunday of Orthodoxy, the clergy, led by the altar servers and followed by the Cathedral School children bearing icons processed around the interior of the Cathedral, celebrating the Rite of Orthodoxy culminating in the common reading of the Synodicon of Orthodoxy and the chanting of the Great Prokeimenon, “Who is so great a god as Our God. . .” giving glory to God Almighty for the restoration of icons and in remembrance of the first such triumphant procession led by Empress Theodora and her minor son, Emperor Michael III, together with the aged Patriarch Methodios on Sunday, March 11th, 843 in Constantinople. That very procession continues to our day in proclaiming the Triumph of Orthodoxy.