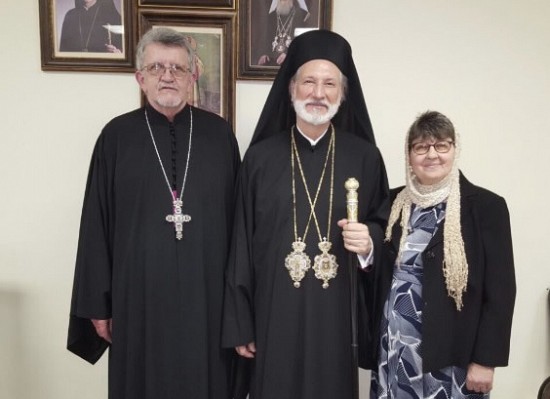 TWO ALTARS IN MY LIFE

On Meatfare Sunday my father, together with my mother, celebrated over four decades of priestly service to the church. I was asked to say a few words, and the first thing which came to mind were my first memories as a child. My fathers altar at church, and my mothers altar at home. Those memories are so real that I think of it daily, which is why this was the first thought which came to mind when I was asked to speak. There were so many things I could've shared watching my parents all these years, but their service to God and His people becomes obvious in the urge and want of their children and even grandchildren to need to serve.

Another very profound delight was spending the weekend with the Bishop of the Eastern American Diocese; a Serbian man from Ohio who without a doubt is a proud Serb and feels this country as his own and loves the Church which he grew up in and now serves as a Archpastor. From the moment we welcomed him at the airport, we headed directly to church to prepare everything necessary for the following day; then to an elegant dinner and delightful fellowship in downtown Cincinnati; to the Divine Liturgy served in a chapel-like church which his presence and first of all the presence of Christ made obvious in him made it as a heavenly Cathedral; to the lunch and fellowship in the  social hall of Saint George Church where everyone saw him as the first among equals and even more amazing than that where it became obvious that every person who was there speaking or not speaking the bishop respected them giving all his attention to each of them.
The comments of the faithful were very pleasant to hear.
During the Divine Liturgy he tonsured two readers, Adam Meador and Veljko Uverici, and elevated the priest of this parish to the dignity of a cross bearer – the highest award given to a priest in the Serbian Church.
Prota Petar Petrovic said he "will wear it proudly, but not with pride". At last the bishop responded to these words and again offered a short sermon in the fellowship hall explaining what exactly Prota meant as the Serbian word понос (pride) is derived from the Greek word πόνος (pain), i.e. "bearing pain with dignity".
I also must mention just one part of his most eloquent and pastoral sermon where he briefly touched upon each of the Sundays leading to the beginning of Great Lent and in a way concentrating on making it obvious to all how much God loves us and how much we should love each other. He said "Sin is the ability to destroy love".  For me, this was the best definition of sin I have ever heard.
I briefly shared my impressions with the bishop and how enlightened I was having spent the weekend with him. It was obvious that he was equally as delighted to share this weekend with us.
His visit ended, when on the way to the airport, he learned of and insisted of stopping by to visit a much ailing parishioner of St. George Church, Mr. Gregory Miladinov.
And last, but not least I must say that my father for several years now really prayed for this award. I didn't know why, because truly he is not as proud as I am, until he was given this great honor and had a chance to speak. It then became obvious that one of the main reasons he wanted this was so that he can have a chance to bring to light the works of his beloved wife for 44 years and our mother Protinica Gordana.