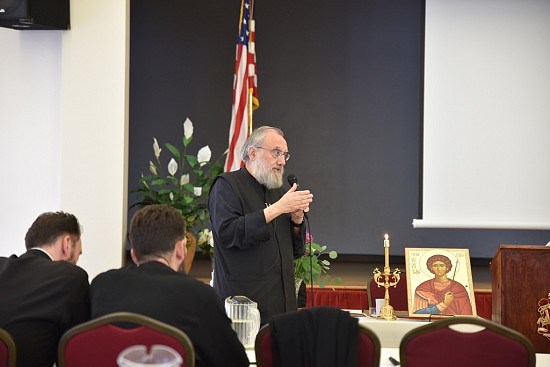 HOW CAN PSYCHOLOGICAL KNOWLEDGE ASSIST IN SPIRITUAL LIFE?
Day Three of the Sts. Sebastian and Mardarije Orthodox Institute

Following Orthros and a continental breakfast on Thursday morning, on the feast day of the Holy and Righteous Simeon the God-receiver Anna, the final plenary session began, entitled: How Can Psychologic Knowledge Assist in Spiritual Life?

Fr. Vasileios spoke of the many misunderstandings that feed the controversy between psychology and theology. Distinctions, however, should be made so that we know to differentiate between issues, mental disorders and problems that can be addressed by a priest and those which require professional psychologists. Interestingly enough, according to some studies patients tend to first go to the minister. Mental disorder are of the mental functions such as our thoughts, feelings and desires. When they are disturbed we have disorders. These disorders have been emphasized by modernity and is one reason people seek fiction in order to cultivate their emotional world, to reflect on their own inner space.

Psychology, in other words, is the fundamental language today just as philosophy was in the first centuries after Christ. While the two have their own respective vocabularies we need to strive to capture the relationship between the two worlds, discovering why there are so many tensions between the two. In fact, we find much psychology in the Patrisitic writings beginning with the Holy Apostle Paul who writes about anger, St. Basil and St. John Chrysostom who write on pedagogical principles, St. John of Sinah on narcissism and so on. Psychology studies the laws of human beings after the fall because no one functions outside of these laws and therefore they apply to all of us. A progress in spiritual life lessens the power of psychological laws. For instance, anger issues can be addressed pastorally and result in one not only not having struggling with anger but loving one's enemies.

The role of theology is to reveal the begining and the eschata, in other words, to give meaning to our lives. Theology respects science but places the priority on spirituality. It does not deal with how I function in a corrupted nature but why I exist, which psychology does not deal with.  On the other hand, science and psychology can help us cope with depression and anxiety for instance. Without psychological intervention these two very disorders would otherwise cause us to sin. Also, psychology promotes a healthier relationship with God when we examine and are faced with our responsibility which leads to honesty and humility and ultimately to love.

We have to avoid not recognizing psychologic laws but we also can't overemphasize these very laws. The truth about beings is ontology. For the Orthodox the real truth about beings is the ontological one but because we have mental functions (thoughts, feelings, desires) we perceive the world psychologically. The psychological element is the projection of the ontological element, it's how we perceive it. The capacity to love, for instance, is an ontological element. An extreme example would be St. Mary's capacity to love which was distorted. Later, when it was healed,  this enormous feeling for love was geared towards God and as a result we see her extreme ascetism, real ascetism which cannnot exist without love.

While Fr. Vasileios advocates the use of psychology it can be misused as it is in some parts of the Christian world, particularly in the West, where it ultimately ceases being a theology that leads to sanctification. This opposite extreme is fundamentalism which refuses to have any dialogue with the world or science.  He concluded that pastoring without psychology is blind just as therapy without thelogy is unfilled.

Dr. Stevan Harris a psychologist and parishioner of the Nativity of the Most Holy Theotokos parish in Orange County served as moderator and led the discussion that followed.