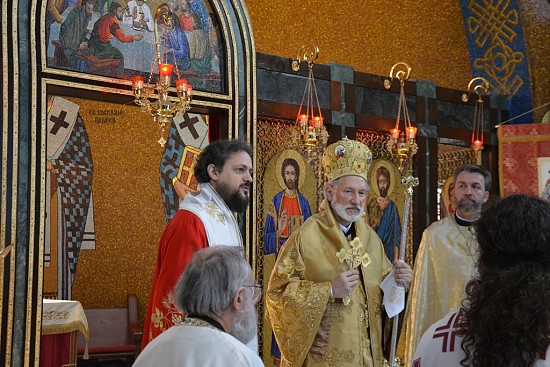 SECOND DAY OF THE STS. SEBASTIAN AND MARDARIJE ORTHODOX INSTITUTE

The second full day of the Sts. Sebastian and Mardarije Orthodox Institute began early in the morning Wednesday, February 15, 2017, the feast day of the Meeting of the Lord, with the Holy Hierarchical Divine Liturgy officiated by His Grace Bishop Irinej of Eastern America and His Grace Bishop Maxim of Western America, the host hierarch and the concelebration of a number of diocesan and visiting clergy. In his homily following the liturgy Bishop Irinej spoke of the gift of the encounter with Christ that we are given in the Holy Liturgy, mirroring the encounter of St. Symeon with Christ celebrated in the Feast. It is because of this encounter which we have now in the liturgy that we have the hope –even a foretaste – of that great and final encounter with Christ at His second and glorious coming.

After breakfast, the second plenery session of the Institute began with a focus on the phychosomatic health of the clergy and their families in North America and Europe. Supporting his lecture with information gathered among clergy of the Church of Greece and the Greek Orthodox Archdiocese of America, Fr. Vasileios delineated three primary areas of stress on modern clergy. The focus areas included external pressures arising the the particular nature of the priesthood, internal issues arising from the personality and psychological makeup of the priest and his family members as well as the interelational issues of the priest with parishioners, fellow clergy members and his family.

According to the reference studies utilized by Fr. Vasileios, clergy represent a high risk group for psychosomatic illnesses and can be compared to physicians, nurses and teachers in terms of higher probablities of burnout and mental of physical breakdowns. He further elaborated on specific stress areas which can range from internal conflict arising from an inability of the clergy to cope with the great extremes of information and emotions he can be privy to within the course of single day, to personality issues resulting from subtle forms of narcicism, to breakdown of essential relationships within family or parish.

Following the session, a lengthy Q & A session dealt with a wide range of questions. Many of the questions focused on the diffuculties arising in the field of interparish relationships. Having served as a parish priest for 30 years, Fr. Vasileios indicated that the importance of finding a balance between extreme reactions was crucial in alleviating many of the more common stress reactions in clergy. The issue of what makes for a healthy priest and clergy family was also a key theme. Fr. Vasileios reminded that participants that this question is directly related to the overall health of the local Church. If there are healthy young men and women within the Church the likelihood of healthy clergy is much higher. His Grace Bishop Irinej spoke about the practice within the Serbian Church of –by neccessity –placing newly ordained priests within parishes and having them play the role of confessor immediately. Fr. Vasileios then spoke at length about the potential downfalls of such a situation. Being forced to deal so explicitely and so early with parishioners issues can lead to an underdeveloped personality within the priest –a sort of false or public „person“ can develop which hinders the actuall spiritual and human development within the priest.

Participants were broken up into three groups each discussing different aspects of the morning's plenary session.  The first group dealt with the topic "Specific stressors of clergy in America", the second "Clergy wives’ burden and its impact on their health"  and the third  "Relationships among clergy as sources of either (di)stress or alleviation/support ".

Free time followed lunch after which all participants met once more in the main hall in the late afternoon for each group to present to Fr. Vasileios the results of their discussion sessions to which Fr. Vasileios offered his comments drawing from his many years of pastoral and psychological experience on the many practical issues in parish life from both the perspective of the clergy and clergy wives.

Following Vespers and dinner the evening's discussion was entitled: The Spiritual Father Encountering a Person with Same-Sex Attraction.

While offering scientific statistics regarding persons of same-sex attraction Fr. Vasileios centered his talk on the pastoral aspect of encountering someone with SSA. Empathy is the cornerstone of any help. Clergy must be armed with truth and love as they are revealed to us in the Divine Liturgy in the form of our two confessions: the Creed (=truth) and the Lord's Prayer (=love). Ultimately, our concern and aim escathological in nature. We don't know why we have certain tendencies and weakness. They are essentially a mystery to us which will one day be revealed to us in the next life and therefore they are the cross we bear in this life. The role of the Church is to alleviate the burden of that cross. The only way this can be achieved by the Church is if the person is included in the community of faithful. Subsequently, the congregation must be educated about persons of SSA in order to include them in their community. While the ontological truth remains so eternally the means and the manner in which we deal with people who face a variety of discorders must change. This resulted in a lively discussion afterward.

To end the activities of the second day of the Orthodox Institute host priest, Fr. Bratso Krsic, introduced the Morava Senior Ensemble who sang a few folk songs. On a final note Bishop Irinej called the attention of everyone and announced that today is a very special day for Prota and Protinica Petakovic as they celebrate their 58th wedding anniversary. With applause and the singing of Mnogaja Ljeta the second day came to an end.