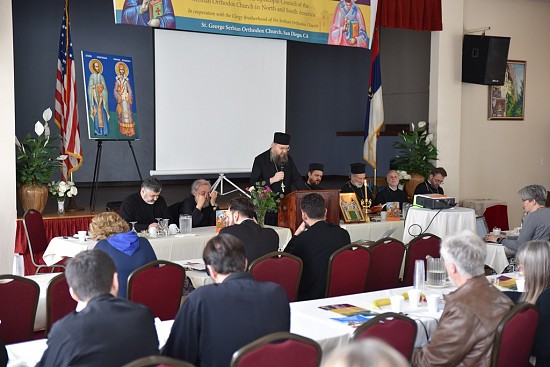 Clergy and faithful filled the St. George Serbian Church in San Diego, the host church of the 3rd Annual Sts. Sebastian and Mardarije Orthodox Institute, for the morning Orthos service on Tuesday, February 14, 2017, the feast day of the Holy Martyr Tryhon of Phrygia. Orthros was served by Hieromonk Fr. Platon (Jovic), a visiting monk from the Diocese of Banja Luka

His Grace Bishop Maxim of the Western American Diocese welcomed all clergy and laity, many of whom were attending from other dioceses. He welcomed His Grace Bishop Irinej of the Eastern American Diocese who also greeted everyone at the beginning of this multi-day event. V. Rev. Dobrivoje Milunovic, president of the Clergy Brotherhood of the Serbian Orthodox Church, greeted the Instittue on behalf of the Brotherhood. Finally, Fr. Damascene introduced this year's speaker Rev. Fr. Vasileios Thermos, MD, PhD.

Before Fr. Vasileios began his first plenary session he spent a few moments reflecting on his personal connection with Serbia and the Serbian people which began while he was a young student of medicine. He had the opportunity and blessing of meeting Fr. Justin Popovic, of blessed memory, a year before his repose. It was on that occasion that Fr. Justin gifted to him a small Divine Liturgy service book in which he inscribed a small note, a gift which he treasures to this day.

The title of the first session was: Addiction and the person: A Psychological and Theological Approach. Addiction is most commonly associated with dependence on substances like drugs and alcohol, but more broadly it may refer to any behavior that is compulsive and brings adverse consequences to the person and/or to others. In the scientific literature it has been characterized as a disorder of the brain’s reward system. What would be the closest equivalent in Patristic literature to the modern concept of addiction? While this of course is open to discussion, it seems that what we call addiction might be what the Fathers call the last stage in the growth of a passion. In the Patristic schema of the development of a passion, first comes the provocation of the tempting thought, then the conjunction of the thought with the feelings, then the joining or agreement of the will. If one does not pull back at this point, the thought becomes a habit and the mind is constantly preoccupied with the object of the passionate urge. Finally, in the last stage, the person falls into the captivity of the urge. As St. Nilus of Sora wrote in the fourteenth century, this last stage, captivity, “is what the Fathers truly call ‘passion.’” St. Nilus says, “It is when after a long time a certain thought becomes nested within the soul, and, like a habit, becomes a part of a person’s own nature. He has freely allowed it to enter within himself, so now he is continually disturbed by [it]…. Repeatedly a phantasm is presented to the troubled soul, which is willy-nilly attracted to it more than to all other thoughts.”

This Patristic understanding of the final stage of a passion as captivity ties in with some of the key points made by Fr. Vasileios in his article, “If Addiction Is an Answer, Then What Was the Question?” Here, looking at the question of addiction from a theological framework, Fr. Vasileios discusses it within the context of human freedom. First, he points out the paradox of our own times, when we have struggled to achieve such freedom and independence, and at the same time have demonstrated such an amazing willingness to subjugate our internal human freedom to all kinds of addictions, many of them unknown in the past. Secondly, he argues that addictions are rooted in the urge to control, which becomes an obsession, resulting in the person paradoxically having an illusion of control but in reality being enslaved by the addictive behavior. Put another way, the person seeks control while engaging in rewarding stimuli, and has the illusion of being able to cease this engagement. Such an urge for and illusion of control are incompatible with real relationships. As Fr. Vasileios observes, “A real relationship is unpredictable and not subject to control, and this is exactly what the addict wishes to avoid…. A true relationship is synonymous with freedom.”

Framed in this way, the way out of the mire of addiction becomes clear. In Orthodox theology we know that man was created to be in relationship -- in communion -- with God and with other human beings. In Fr. Vasileios’ article on addiction, which I found very helpful, he expands this theme, discussing the problem and its solution, and providing advice for pastoral care. In this talk we look forward to hearing more insights on this topic.