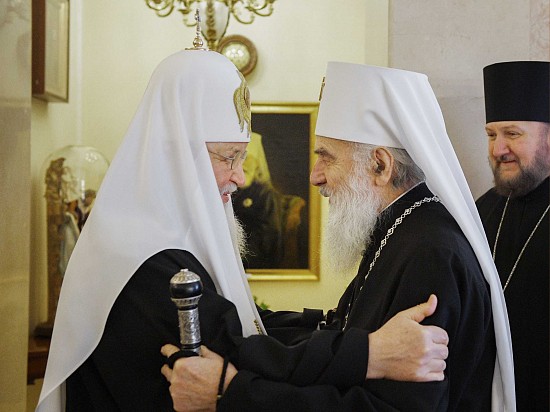 On 29 January 2019, at the Patriarchal and Synodal residence in St. Daniel’s Monastery, His Holiness Patriarch Kirill of Moscow and All Russia met with the Primate of the Serbian Orthodox Church.

His Holiness Patriarch Irinej of Serbia was accompanied by Bishop Irinej of Bačka; Bishop Antonije of Moravica, rector of the Serbian Orthodox Church’s Representation in Moscow; Bishop Stefan of Remesiana, vicar of the Archdiocese of Belgrade; Bishop Isihije of Mohacs; Archpriest Vladan Simič, secretary of the diocese of Bačka; and Subdeacon Dejan Nakič, private secretary to the Patriarch of Serbia.

Speaking about the plight of the Orthodox Serbian people in Kosovo and Metohija, Patriarch Kirill expressed his concern over extremist forces’ increasing aggression against the Serbian population.

“We always pray for our brothers and sisters in Kosovo and Metohija,” His Holiness said, “We know that Kosovo and Metohija play the unique historical and spiritual role in the life of the Serbian people, and realize how hard it is for everyone who knows the history of Serbia and the Serbian Church to see all the bad things happening in these lands. Yet, the Lord is leading our Churches through ordeals and, perhaps, that is why you, like nobody else, understand our pain caused by the developments in Ukraine.”

According to the Primate of the Russian Church, all these developments are links in one chain, for they are “attempts to weaken the Universal Orthodoxy by means of schismatic tendencies.”

“Of course, this situation affects, first of all, the Russian Church which today suffers greatly because of the schism in Ukraine. And, undoubtedly, it is essential that the developments in Kosovo and Metohija never lead to a break-off of the spiritual link between Serbia, Serbian Church and these lands which have always been its integral part,” His Holiness continued.

“While differing in certain things, such as geography, location and history, our Churches have very much in common – first and foremost, the host of martyrs. Our martyrs were always faithful to the Orthodoxy, they laid down their life for the Church and instructed us to be faithful to the church unity, to preserve the purity of Orthodoxy and to exert every effort to prevent adverse winds from destroying the unity of the Orthodox Church today,” Patriarch Kirill said in conclusion.

His Holiness Patriarch Irinej thanked the Primate of the Russian Orthodox Church for the invitation to attend the Moscow celebrations, saying in particular, “On behalf of our Church and our people we express our warmest wishes that you occupy the Throne of the Moscow Patriarchs for many more years. You lead the Russian people on the path towards God, for the glory of God and for the good of the Universal Orthodoxy. You are the head of a powerful Church and of the Orthodox people who overcame many temptations throughout the history. You are a vivid example and we strive to follow in your footsteps.”

“I thank Your Holiness keeping yourself apprised of the developments in Kosovo and Metohija. What is currently going on in Kosovo and Metohija causes us great pain,” Patriarch Irinej said, “Kosovo for us is a sacred land ensanguined with our blood, for we defended our shrines at the time of the Ottoman Empire and under other circumstances. All that is of tremendous importance for our history and culture is rooted in Kosovo and Metohija. This is the land of our glorious history. Many saints shone forth there. We do all we can to defend ourselves from these attacks and place our great hopes on big brotherly Russia and on you, Your Holiness. We hope that with your contribution we will be able to defend Kosovo and Metohija.”

Patriarch Irinej also expressed the position of the Serbian Orthodox Church concerning the ecclesiastical crisis in Ukraine, saying, “It is a great temptation for the Orthodoxy, and it happens inside our house. Regrettably, it is not a canonical or ecclesiastical issue, but purely a political one, but the Universal Orthodoxy must address it with all seriousness. Our visit to Moscow gives a good opportunity to exchange opinions, to discuss what we should do next. We do not dare turn a blind eye to such problem. And we will pray to God the Lord, asking Him to eliminate this temptation in His Church.”