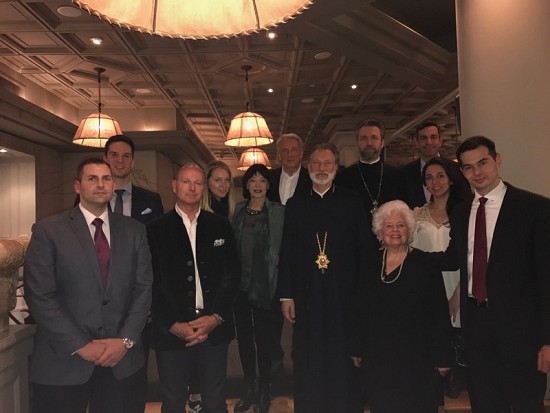 New York City, NY - On Thursday, January 17th, 2017 His Grace Bishop Irinej of Eastern America hosted a gathering in honor of Her Royal Highness Princess Elizabeth, who was visiting from Belgrade, together with the Executive Officer of the Princess’ Serbian Foundation, Mr Dragan Babic. Joining them were her nephew, His Royal Highness Prince Dimitri, and Princess Elizabeth’s granddaughter, Ms. India Lily Balfour, as well as Mr. Adam Tatalovich, Pro Personnel Scout under famed NBA Star Vlade Divac for the Sacramento Kings.

Princess Elizabeth is greatly admired and highly respected amongst the Serbian Royals for the good she has accomplished through her Serbian Foundation in discovering and changing the lives of many talented young individuals throughout Serbia (http://momirnovakovich.com/about/princess-elizabeth-foundation/).

Prince Dimitri, an entrepreneur, a jewelry designer, a philanthropist and a New Yorker, is the founder, president and creative director of the jewelry firm bearing his name, "Prince Dimitri Company”.

Meeting with Their Royal Highnesses and guests were members of the newly-appointed Board of Trustees of the St Sava Cathedral, and the Restoration and Development Committee, Very Reverend Fr. Zivojin Jakovljevic, Cathedral Dean; Mr. and Mrs. Marko Jovanovic, President of the Board of Trustees; Dr. Zorka Milich, Vice-President, and Chairwoman of the Restoration and Development Committee; Mr. Vladimir Delic, Financial Secretary of the Board of Trustees; and Mr. Petar Markovic, Financial Professional. All were deeply honored and grateful for the Princess’ words of encouragement on rebuilding the St. Sava Cathedral, rightfully, as the motto of her heraldic arms is Service Is Love In Action.