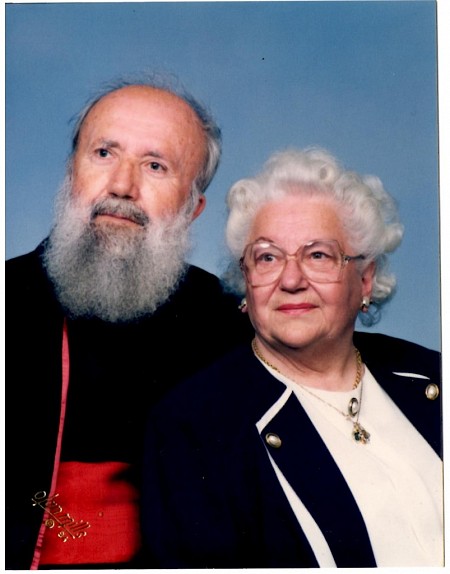 Father Dusan Vavich was born on July 4, 1919 in Krnjevo (near Smederevo) from parents Zivan, a railways administrator, and Rajna (nee Cirkovic). Dusan, the eldest of three children, lost his father when he was 11 years old, so Rajna raised her young family on her own. Dusan was very obedient and pious. He helped to support his family and to lighten his mother's burden, and so he learned to be responsible, diligent and trustworthy from his early youth. He loved to go to school and learn new things, and he read a lot. He completed his elementary education in Krnjevo, his secondary education in Smederevo and because he was an excellent student he was awarded a scholarship for his tertiary education. World War II caught him in the middle of his academic studies but he managed to obtain his degree at the Faculty of Theology in Belgrade in 1943.

Dusan had married in 1941 while still a student of theology. His wife, Dragica, was the daughter of a well-to-do merchant, Ljubomir Rankovic and his wife Radmila (nee Markovic) from Veliko Orasje, a village next to Krnjevo. The young couple settled in Smederevo where Dusan worked as a professor of religious education for a short time. He had joined the Dobrovoljci under the command of Budimir Nikic and participated in all the struggles against the Communists during the German occupation of the then Kingdom of Yugoslavia. Toward the end of 1944 his division along with others had to retreat to Slovenia. From there they were able to reach Italy where they welcomed the end of the War. However, they had to stay in various refugee camps until the end of 1949 when they were able to finally emigrate to the United States. In the United States God granted them three more children after the loss of four who did not survive the war.

Father Dusan was ordained to the diaconate in Alhambra, California in 1952 and soon afterwards to the priesthood.He began once again to serve his people and the Serbian Orthodox Church with great zeal but now in the capacity of a priest. In 1960 he was offered a parish in Italy and because he felt closer to his country he gladly accepted and so began a new chapter in his life. During the years that followed until his official retirement in 1982 he dedicated his life to serving the Serbian people who arrived in all parts of Western Europe as guest-workers. He saw the urgent need for more church parishes and so his priestly duties extended to a lot of missionary work among his people. Most of these people had come from a communist background with no religious freedom and needed be re-introduced to their Orthodox faith. He spent many years and much effort to organize new church parishes and to re-activate others like the church parish in Hamburg, Germany, which had been dormant since 1945. Of course, his wife and children helped him in his work and moved with him to different cities and countries in Western Europe throughout those years.

Father Dusan remained very active even after his retirement. He visited Yugoslavia/Serbia following the recent wars and helped many Serbian refugees and displaced people wherever he could. Many people in Belgrade and around Nis remember him with great love and respect. When in Belgrade he served in the little church of St. Nikola helping Fr Theodor. He also visited Australia and served there while staying with his children and their families together with his wife for several years. He returned to live in the United States after his son and daughter moved back to America. He finally settled in Phoenix, Arizona where he was kindly welcomed by Fr. Janko (Trbovic) and concelebrated the Divine Liturgy every Sunday and feast day until his 90th birthday. Soon after he suffered a hip fracture and his health deteriorated from then on. A bit more than a year before his repose he was tonsured a monk and received the name of Sava, from St. Sava the first Archbishop of Serbia. Hieromonk Sava reposed peacefully on the feast of St. John the Baptist on 7th/20th January 2013 leaving behind his wife, three children and six   grandchildren.

Father Sava's first and greatest love was always his Serbian people and the Holy Orthodox Church, which he served his entire life wholeheartedly. His dedication, sincere love and strong faith are his legacy and he will be remembered by many. May his memory be eternal!