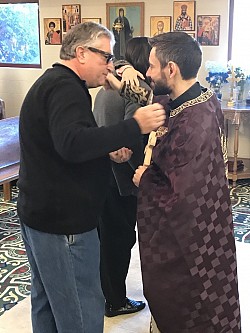 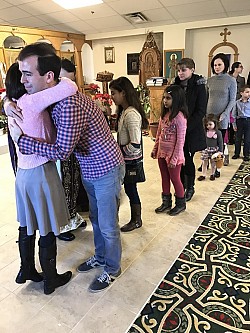 Even though farewell for these good people was planned and realized on the day of the celebration of our patron saint (December 18th) and the ordination of priest Marko, and even though this was Sunday January 1 and was not especially announced and promoted, the church was full and very emotional for the last Divine liturgy with two of our faithful who will be serving a church in Jackson California.

As a parish priest of Saint Nicholas Serbian Orthodox Church in Indianapolis Indiana for almost 20 years I must say the following.  Personally I was amazed and I'm grateful to God for the people of this community. It was awesome to see how many people were offering so much help  to our former Deacon and his wife.  From saving and bringing in boxes to helping them pack and even offering to drive their belongings from Indianapolis to Jackson California.  Most of these things we did not plan or organize, they were just spontaneously occurring.

This also says much about the newly ordained priest Marko and his wife.

We truly hope and pray the people at the oldest Serbian Church on this continent will love them the same way we have and always will.