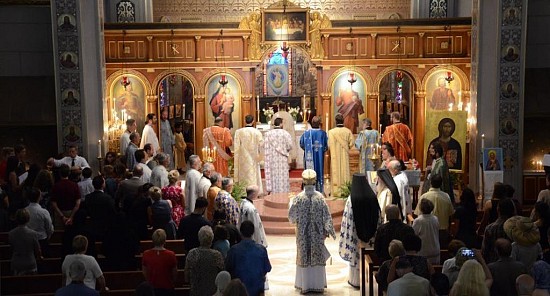 THE CHURCH AS FAMILY & THE FAMILY AS CHURCH

“You are no longer strangers and sojourners, but are fellow citizens with the saints
and members of the household of God..” –Ephesians 2:19

Clergy and the faithful people began arriving during Matins Sunday morning. After venerating the icons one by one they approached their diocesan bishop, His Grace Bishop Maxim of Western America, for a blessing at the start of a new day. Midway through the service the clergy disappeared only to reappear in their vestments and in processesion, welcoming the bishop who was also fully vested and thus the Holy Hierarchical Divine Liturgy began in a full church.

Singing the responses during the liturgy was the very talented Youth Chorale and the Catheral Cantors led by their gifted director Johnny Braun.

While the Divine Liturgy plays a central role in all church gatherings, the Diocesan Days liturgies are joyous events in particular as clergy from throughout the diocese gather around one Holy Table as the bishop leads them and the faithful people who have come from different parishes and regions of the vast diocese, in the eucharistic prayer.

Later, during the festive but formal banquet in the main hall on this final day of the Diocesan Day gathering the female ethno group Breze performed once more. This was followed by a surprise performance by Popadija – and extremely talented cellist- Biljana Bojovic who perfomed a few pieces, beginning with a very moving rendition of Suza Kosova. The junior and senior Kalemegdan folklore groups from the neighborning St. Sava Church in San Gabriel also wowed the audience during the program. Debra Tasic our Diocesan treasurer thanked this year's guest speaker, Fr. Timothy, while Bishop Maxim presented him with the monumentous publication, The Christian Heritage of Kosovo and Metohija. Later, Debra made a very special announcement that the Diocesan Vice President, Jasmina Boulanger, had been awarded the Serbian Orthodox Church's highest distinction, the Medal of St. Sava, which His Grace Bishop Maxim presented to her.

In his keynote address the guest speaker, Fr. Timothy Pavlatos, touched on a number of themes he had already discussed the previous two days. More specifically, he stressed the importance of this very fellowship, the need for clergy to support one another, to be with one another and, naturally, to pray with one another. Due to their demanding position as parish priests who oftentimes spend hours doing other things in the parish not necessarily related to their priestly calling, Fr. Timothy called upon the faithful to bear this in mind and support them that they not suffer a burnout. He noted how a bishop had once told him that according to some of the holy fathers the demons appoint 7 demons to a priest at his ordination because if he can cause one priest to stumble and fall through temptation a much larger number will fall with him.

Furthermore, he cited a case in which members of an AA group were asked what was it they found most appealing in their groups. Their answer was the overwhelming feeling of being safe during those meetings as they revealed and discussed their, oftentimes, most embarrassing moments during their addictions. Similarly, we are called to ensure this same sense of security in our parish communities. Subsequently we will be more open with one another since it is usually because of the things we hide from one another that we develop habits and addictions which have a tendency to overtake our lives and even ruin them.

Live music and fellowship continued throughout the afternoon hours. But this was also the time that many of the clergy slowly said their good-byes as they had to begin their, in many cases, long journey home. They will continue to stay in touch and visit neighboring priests throughout the year and for various occasions: baptisms, funerals, Slavas, etc. But they will have to wait until Labor Day weekend next year when once again the bishop, all the clergy and monastics and all the faithful sons and daughters of the Holy Serbian Orthodox Church and members of the Western American Diocese, meet in Jackson for the 22nd Annual Diocesan Days!