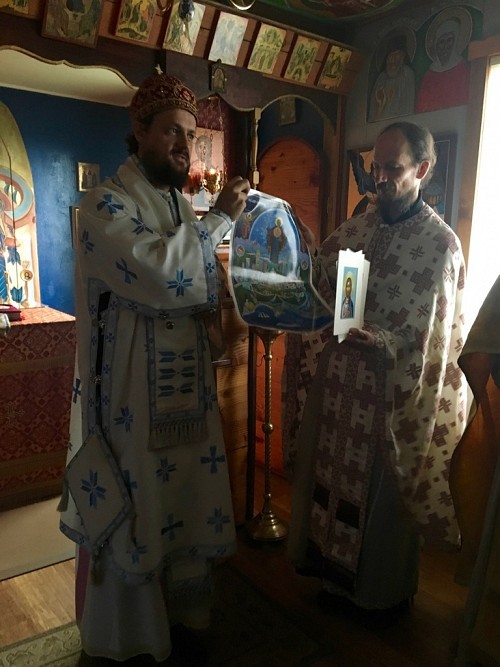 Led by His Grace, Bishop Maxim and Fr. Blasko Paraklis, a small group of Serbian pilgrims visited and venerated some of the holy sites of Alaska, including Kodiak Island, Spruce Island and St. Nilus Island, as well as the small community of Serbs in Anchorage, AK.

On Monday, August 15, 2016, the group arrived on Kodiak Island, where they were warmly welcomed at the Holy Resurrection Cathedral (OCA) in Kodiak and allowed to venerate the opened relics of St. Herman, Wonderworker of Alaska.  With St. Herman’s blessing, their voyage continued on the calm, cold Pacific waters, as they headed to Spruce Island by skiff- approximately a 45 minute boat ride. 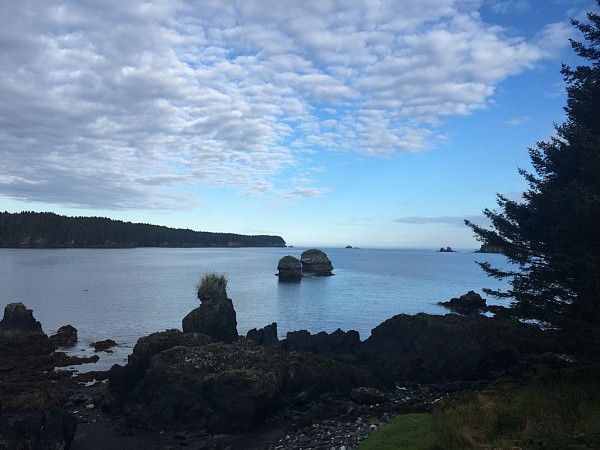 Spruce Island, known as the “New Valaam”, is where St. Herman lived from 1808-1818 in a life of prayer and strict asceticism.  Although the original house he lived in no longer remains, a new house and church were built on the site of his repose.  A miraculous, healing freshwater spring flows nearby.  The island is also home to the monks of the St. Michael Skete, under the jurisdiction of His Grace, Bishop Maxim. Three monks are currently living in the monastery, celebrating the daily cycle of services and farming and fishing for sustinence.  The monks boast an impressive vegetable garden and preserve whatever fish they catch for the cold winter months.  The monastery does not have running water or refrigeration.  Heating is obtained by burning the wood they must chop themselves and store in a small shed for the winter.  It should be noted that the hard physical work is amplified by the very steep island terrain which is wet and rocky in the warm season, and covered by thick snow and slippery ice in the cold season.
The male pilgrims stayed at St. Michael’s Skete, while the women were shuttled to the St. Nilus Skete, (dedicated to St. Nilus of Sora), which is settled on a small island about ten minutes away by boat.  Home to a myriad of birds- eagles, warblers, thrushes, woodpeckers and puffins- St. Nilus Island, as it’s known, is also home to four nuns and the Abbess, Mother Nina, also under the Western American Diocese of the Serbian Orthodox Church.  Like St. Michael’s Skete, theirs too is very rustic and they live off of the land.  The sisters produce and sell prayer ropes as a means of supporting themselves.  They are in the process of building a new winter house and upgrading their current cells in order to be able to better survive the harsh winters and to accomodate future pilgrims.  While many may find the conditions here rough, the monastics truly appreciate the natural beauty and splendor of the area, and as well as the solitude it provides so that they can experience the “royal path” and pray for those of us living in the world.
The pilgrims participated in the services and fished every day with the monks where they caught several very large sea bass, cod fish and even a shark!  Fellowship followed the meals and the group engaged in traditional folk singing in Serbian, Greek, English and Italian.
As a token of appreciation for their hospitality, Bishop Maxim gave part of the relics of St. Sebastian of San Francisco and Jackson, along with matted icons of Christ and St. Sebastian, (from the hand of Fr. Stamatis Skliris), as well as an icon of the Theotokos “Our Lady of Los Angeles” to each church the group visited.
On the way back to Kodiak on Wednesday evening, the pilgrims were treated to a cruise around the area where they were greeted by local humpback whales who appeared to be performing for them: spouting water near their boat and then diving down and resurfacing in sync. Truly a remarkable and unforgettable sighting.
On Thursday they flew to Anchorage and were hosted by local Serbian families.  Here they visited the famous Alyeska Ski Resort where they hiked to the top of Mt. Alyeska (3300’), absorbing the gorgeous wilderness below and several glaciers nearby.

On Friday, August 19, the festal Divine Liturgy for the Holy Transfiguration at St. Innocent Cathedral (OCA) in Kodiak was led by His Grace, Bishop David and His Grace, Bishop Maxim.  The traditional blessing of fruits and grapes followed the liturgy.  Bishop Maxim also gave copies of the above-mentioned icons to the Alaskan Diocese of the OCA and, in turn, received a copy of the miracle-working icon, “Our Lady of Sitka” from Bishop David.  After the liturgy the group went on a breathtaking cruise around the Portage Glacier.

On Saturday, August 20, His Grace celebrated Divine Liturgy at the Greek Orthodox Church of The Holy Transfiguration, with the congregation of the Venerable Peter of Korish Serbian Mission Parish of Anchorage.  This mission is comprised of about 40 Serbs living in the area, but does not have its own church.  Later that day, the pilgrims went berry picking in the picturesque Arctic Valley then gathered with the St. Micheal parishioners for a sumptive feast before returning to California.
For information on sending donations to either monastery or the mission parish, please contact Fr. Blasko Paraklis at 949-702-0706.
Serbian Orthodox Church