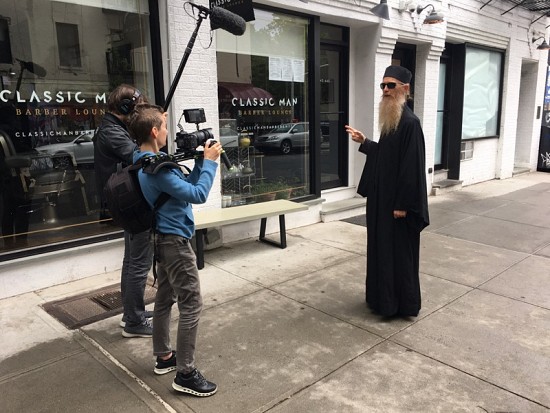 With the blessigns of Bishop Irinej of Eastern America the monk Arsenije (Jovanovic) of Monastery Ribnica near Valjevo, gave a lecture in the church hall of the St. Eleftherios Churc  on Sunday, June 10, 2018, on the topic: Orthodoxy - Old solutions for contemporary problems.

After a cordial greeting by Fr. Dr. Zivojin Jakovljevic, dean of the St. Sava Cathedral in New York City, the monk Arsenije spoke about the meaning of the Orthodox faith in the life of contemporary man. Speaking about his bitter life experiences during youthful wanderings while he lived in New York, he openly shared some of the details of his personal transfiguration in his encounter with God. His lecture can be seen as an authentic confession, reminding many of Augustine's Confessions. Among those present were many young people who could relate to the style in which monk Arsenije was relaying his experiences.

"I was filled with emotions seeing New York after a full 25 years", said monk Arsenije in his opening remarks. "I left a part of my life in this city, and it will always be a part of me. My being trembled as I passed by the streets I knew of this both charming and dangerous city."

His lecture left no one indifferent. Whoever has read the Lives of the Saints can recognize the human yearning for God while, at the same time, battling against sins. In that agony and in the moments when we neglect the spiritual life and we come to our disconnect with our relationship with God, marked Arsenije, an inevitable wandering ensues. Monk Arsenije reminded us of the good capacities of the human being when it recognized God as Creator, Lord and God, Brother....and those destructive when one rejects that same God and wants nothing to do with Him, thus becoming a slave of one's own pleasures.

"Life in New York was everthing, except descent and God-pleasing," says monk Arsenije. He spoke of his life as a sinner and suicidal, describing his mental state at the time as existential loneliness. For him this was a sort of foretaste of hell. And many of his intelligent and beautiful friends experienced the hell of life. Monk Arsenije continued and spoke of the moment he fell in love with God, recognizing the delusion and realizing that it was only through faith and the liturgical life that he could come to himself.

The spiritual struggle is continuous. It is clearly expressed in the youthful years of maturity and searching. During those years when the existential questions are posed: who am I, what is the meaning of this life, how should I live this life?

These questions are asked by every man during his, whose answer, as monk Arsenije notes, are found in the Gospel and in the Church of Christ. For this reason, these lectures are particularly useful for the youth. They display a desire for an authentic life in an unobstrusive manner, not seeking to be judged for their sins and mistakes. The monk Arsenije experienced and serves as a magnet for all of them. For this reason are his lectures are worth taking note of.

On this occasion , we most cordially invite all our parishioners to come in great numbers and listen to the lectures of monk Arseny in their respective churches.

Monk Arsenije will be the main speaker at the conference for high school students at St. Mark Monastery in Lorain June 20-24, organized by our Serbian Orthodox Church in North and South America. During his stay in the United States, he will hold several lectures in the Eastern American Diocese of the Serbian Orthodox Church.