The Opening of the Relics of Our Father Among the Saints
MARDARIJE
First Serbian Bishop of America and Canada
April 22/May 5, 2017

With the blessing of His Grace, Bishop Longin of New Gracanica and Midwestern America, the relics of St. Mardarije, which have laid in the Church of St. Sava Monastery in Libertyville, Illinois, since his internment in December 1935, were uncovered. The opening revealed St. Mardarije’s holy relics to be incorrupt.

On Thursday, May 4, 2017, His Grace Bishop Longin served Divine Liturgy at St. Sava Monastery with Sindjel Serafim (Milojkovic), Priest Nikolaj Kostur and Hierodeacon Nektarije (Tesanovic), in preparation for uncovering the relics. Following the Divine Liturgy, Bishop Longin and the other clergy served a Moleban with the Akathist written to St. Mardarije. Upon completion, the crew organized to remove the tombstone and flooring in order to exhume the relics arrived, under the guidance of Mr. Dusan Djordjevic of Sveta Gora Funeral Home in Chicago. After removal of the stone, it was revealed that the casket of St. Mardarije was in a cement vault. This caused the opening to be delayed one additional day in order to organize a team to open the vault. 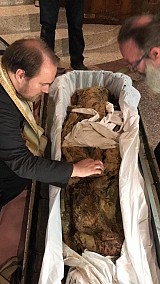 On Friday morning, May 5, 2017, the workers broke the seal of the vault, while Priest Nikolaj Kostur and Heirodeacon Nektarije (Tesanovic) served a Moleban to St. Mardarije at the tomb in the presence of Bishop Longin and Hieromonk Serafim (Milojkovic). Throughout the entire process of exhumation, “Christ is Risen” and other Paschal hymns were sung, both in Serbian and Russian tones, knowing St. Mardarije’s deep love and dedication to both Slavic traditions.

Once the seal of the vault was broken, every effort was taken to lift the cover. During this process, the cover of the vault shifted and fell on the casket, breaking its cover. At this moment, a sweet smelling fragrance arose from the tomb, quickly dissipating. However, it became evident that the Saint was buried facing the west instead of east. This in and of itself is miraculous. It manifested the Providence of God. Had St. Mardarije been buried in the proper direction, the vault cover would have fallen on the side of the casket where his holy head rested. It was visible that his feet had decayed and were bones.

Frs. Serafim and Nikolaj lifted the relics out of the tomb during the singing of “Christ is Risen.” The relics were light in weight and easily placed in a temporary metal coffin. Hereupon the feet were examined, which at this point were the only visible part of the remains. The bones of the feet were goldish-yellow in color. Then, Fr. Nikolaj Kostur proceeded to examine the mid-section of the body. St. Mardarije's Holy hands were holding the cross which was firmly in place and immovable. As Fr. Nikolaj pulled back the sleeve of the saccos, it was revealed that the hands of St. Mardarije were completely intact. Clearly visible were his skin, fingernails and hair. At this point, it was evident that the relics were more than just bones. 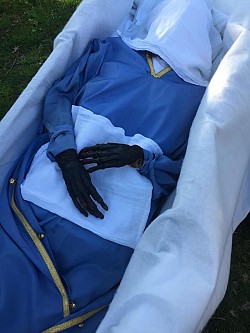 The holy relics of St. Mardarije were lifted out of the metal coffin and placed on two tables which were prepared for the examination and washing of the holy relics.  All of the vestments and clothing were carefully removed, cutting that which could not easily be taken off in order to not disturb the holy relics.   Most reverent and diligent care and utmost attention were given to the work that was being done; the clergy continuously sang the troparion to St. Mardarije and other Paschal hymns.

After all the vestments were removed, it was revealed that the holy relics, from the knee upward, were intact, although very fragile.  The Saint’s anatomy was intact with his skin and hair visible.  When the mitre was removed, his long, dark hair flowed out, confirming his continued monastic struggle until the end of his days.  The hair on his head and beard looked as though he had just reposed; it was very soft.  The eyebrows and eyelashes of his closed eyes were visible.  Also, his ears were still intact.  The body was easily lifted and moved.  There was a great deal of dust which had accumulated in the grave from the nearly eighty-two years since the burial. Upon the removal of the dust from the entire body, the holy relics were washed with warm water and white wine. Hereupon spikenard oil was was used to anoint the body, according to the instructions received from the Holy Monastery of Hilandar. After the anoninting, the color of the skin changed from tan to a dark brown.

After the washing and anointing, the legs, hands and torso were all wrapped in cotton and linen, making the holy relics more easily movable.  Following this process, the holy relics were temporarily vested in a stiharion until his vesting takes place before his Glorification in July 2017.  His face was covered with linen, and he was returned to the temporary metal coffin and covered.

Truly, God is wondrous in His Saints, showing us all His Divine power and that nature is subject to God’s grace.  All of those that partook in this experience, from the clergy to the workers, were moved with the joy and spiritual peace that filled the church during the uncovering of the holy relics.  St. Mardarije lives on, not only in his legacy, but now through his incorrupt relics which will be a renewed rudder for the Serbian Orthodox Church in North and South America, guiding us to move into the future, being directed by the past.  May we follow St. Mardarije on the path of St. Sava, which lead him to sanctity.

Our Holy Hierarch, Father Mardarije, pray unto God for us!  Christ is risen!

Priest Nikolaj Kostur
Chairman of the Liturgical Sub-Committee for the Glorification of St. Mardarije